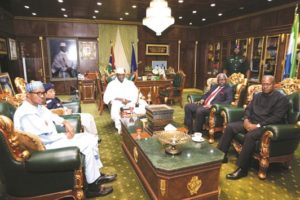 Political complication trailing the recent election in Gambia, has taken a new dimension as the ruling party, under which President Yahya Jammwh contested and lost to opposition, has filed a petition with the Supreme Court asking it to nullify the election result.

In the petition, the President’s party insisted that the country’s Independent Electoral Commission had violated the law and and that opposition leader, Adama Barrow was “not duly elected or returned as president, and that the said election was void.”

The ruling Alliance for Patriotic Reorientation and Construction (APRC), said that it was not present when the IEC issued a recount on December 5, and claimed that there were irregularities in the process and alleged voter intimidation.

The petition came as a quartet of west African leaders try to persuade Jammeh to respect the election result and leave office after 22 years.

Meanwhile, some African leaders are currently in The Gambia to persuade President Jammeh to respect the wish of the electorate by agreeing to step down for Barrow.

Yahya Jammeh, who seized power in a coup in 1994 and has earned a reputation as a repressive leader, has refused to proceed with a handover of power despite initially conceding his loss to opponent Adama Barrow in the election on December 1.
Jammeh cited irregularities in the official results, but his abrupt about-face drew international criticism, and a delegation of West African presidents under the auspices of the regional body ECOWAS arrived in the capital Banjul early yesterday on a mission to resolve the crisis.
The delegation is led by Nobel peace laureate, Ellen Johnson Sirleaf, and includes Nigeria’s Muhammadu Buhari, Sierra Leone’s Ernest Bai Koroma, and Ghana’s John Mahama, who lost an election last week and conceded defeat.
A photo provided by Gambia’s information ministry and taken before the meeting showed the five heads of state seated in Jammeh’s elaborately decorated office at State House wearing leaden expressions, with the exception of Jammeh who had a faint smile.
Asked if Jammeh had been receptive to a message from the delegation, Buhari told reporters shortly after the meeting: “Yes, very much so.”
But just hours before their arrival, Gambian security forces seized control of the Independent Electoral Commission headquarters, which holds the original poll records, according to its chairman.
“The military came to my office and said I am not to touch anything and told me to leave,” Alieu Momarr Njai said. “I am worried for my safety.”
Yesterday, the African presidents’ delegation also met Barrow, who has said he would annul Jammeh’s declaration of Gambia as an Islamic Republic among other reforms.
Diplomats say that if Jammeh seeks to cling to power after negotiations fail, neighbours might consider removing him by force.
Marcel de Souza, president of the ECOWAS commission, told Radio France International on Monday that sending troops was “a conceivable solution.”
Gambia’s president officially has 60 days to hand over power.
Yesterday the ruling party filed a petition with the Supreme Court, asking it to void the recent presidential election result.
The filing seen by AFP said the electoral commission had violated the law and added that opposition leader Barrow was “not duly elected or returned as president, and that the said election was void”.
“(The legal challenge) would put the international community in a strange position and reduce available options,” a diplomat said.
Rights groups say Jammeh exerts strong influence over the court, which has not held a session for a year and a half.
Experts believe that at least four new judges would need to be hired to hear his petition.
Yesterday was the deadline for lodging a challenge to the election result.
Senegal, which surrounds the riverside country of 1.8mn people, called Tuesday’s presidential trip a “last chance mission”.
However, the African Union said in a statement on Monday that it also planned to send a high-level delegation led by Chad’s long-ruling President Idriss Deby.
The role of Gambia’s army is seen as critical, with the United States saying that some military officers had sided with Jammeh.
Army chief General Ousman Badjie had previously called Barrow to pledge his allegiance, the latter’s spokeswoman said.
But yesterday Barrow’s position appeared far less certain.
“I support the commander-in-chief, whoever it may be. I support the commander-in-chief Jammeh,” Badjie said.
Barrow said he had no official state security detail and felt “exposed”.
International rights groups have accused Jammeh, a former army lieutenant, of widespread violations and repression.
He won four previous elections that were criticised by rights monitors, and has survived several coup attempts, the latest in December 2014.
In October, he announced its withdrawal from the International Criminal Court.
He also withdrew the former British colony from the Commonwealth in 2013, saying it was a neo-colonial institution. [myad]