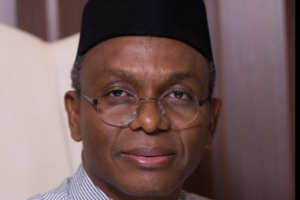 Governor Nasiru El-Rufai of Kaduna State has asked the Fulani community in Chawai, Kauru Local Government of the, to produce one Haruna, who was suspected to be the kingpin in the recent attack on three communities in the area.
The governor, who gave the order when he visited the area to condole with victims of the attack, said the suspect must be produced or be arrested by security agencies.
The News Agency of Nigeria (NAN) gathered that the recent attack might have been a retaliation by Haruna, whose house and cattle were said to have been attacked earlier by villagers, when he allegedly encroached into a farm.
Governor El-Rufa’i said that it is important for Haruna to present himself to the government, “so that we know what his grievances are and find a way to listen to his side of story. But if he doesn’t come forward, the security agencies have a very clear instruction to hunt and apprehend him and bring to justice.
“We will not accept the situation in which people result to self help that lead to loss of lives and property in Kaduna state.”
He warned that the government would not condone any attempt to take advantage of the current situation in the area by self serving interests to whip up sentiments and further enflame more crisis.
“As you can see, there are always people that try take advantage of such situation and it is our duty to ensure we don’t succumb to that. We insist on law enforcement, fairness and justice to everyone.”
The governor appealed to the people of Southern Kaduna to live in peace with another, to ensure development and progress, saying thatthe security of any community begins with the people themselves who must agree to shun violence and settle differences through dialogue.
“It is necessary to live in peace because security is not just in the hands of leaders or traditional rulers or security agencies, ultimately we can only be secure if we choose to live in peace with one another.
“Leaders and law enforcement agencies can only come in to settle disputes or prosecute those that committed crimes, but living in peace is the responsibility of everyone.
“If communities that have lived for a hundred years wake up one morning and say this one is a stranger, this one is an indigene or settler, this speaks of trouble.
“That is why in this state, this government has given very top attention to the issue of indigeneship.
“We believe that anyone that comes and live in Kaduna and is contributing to development of this state is a citizen of Kaduna state, and he will have equal right as everyone.
“We don’t believe that any Nigerian can be a stranger in Kaduna. So I appeal to the people to continue to live in peace, to respect one another.”
He assured that people of the area, that the government would provide necessary infrastructure to guarantee development.
“We have resources constraints, because all states are going through difficult times, but we are going to do our best.
“Kauru is the only Federal constituency that voted for president Buhari is southern Kaduna.
“So it is a very special constituency for us and any time I see the President, he always asks me what are you doing for Kauru, because this is a local government very special to him.
“We are working on ensuring the telecom infrastructure here works well, because many parts of the local government are not covered by GSM services, we are working on that.”
The governor commended traditional rulers in the area, including leaders of the Fulani community for their maturity and push for dialogue and peaceful settlement of the crisis.
NAN recalls that three communities in the area were attacked on Sunday, November 10, leaving behind 38 people dead.
National Emergency Management Agency (NEMA) has provided Maize, mattresses, blankets, women, men and children wears, among others to victims of the attack. [myad]