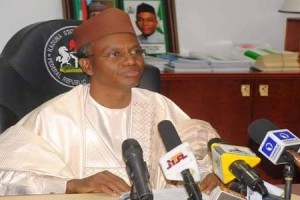 Kaduna state governor, Mallam Nasir El-Rufai has signed the budget of N214.921 billion, made up of N83.46 billion in recurrent spending and N131.45. It was recently passed by the state assembly into law.

In his remark shortly after signing the document on Tuesday at the Government House, Kaduna, El-Rufai said the budget favours the poor and is aimed at improving access to education, healthcare, infrastructure, jobs and security.

“It puts the needs and interests of our people first. In 2017, Kaduna state will spend N44.84 billion on education; N10.49 billion on Health; N24.50 billion on infrastructure, N8.1 billion on water and N4.58 billion on agriculture.

He added that the programme on rebuilding and expansion of township roads will be expanded while the first phase of mass transit scheme will kick off.

He added that an emergency nutrition intervention programme will be introduced to reduce malnutrition and hunger amongst the poorest citizens and children.

According to him, the 2017 budget contains items that reflect increased investment in security and appropriate technology for deterring and detecting crimes and enabling the prosecution of criminals.

The governor who disclosed that the state had just received a debt refund from the federal government which was not captured in the budget, adding that a supplementary will soon be submitted to the state assembly to capture it.

He said 50 per cent of the funds belong to the state government while 45 per cent is for the 23 local governments in the state. [myad]