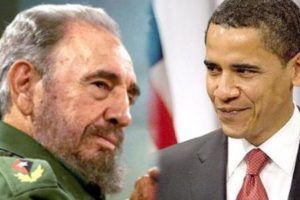 President Barack Obama of America has said that history will record and judge the enormous impact which Fidel Castro, who died at the age of 90, had on the world around him.

In a condolence message to Cuban people, the American President said: “history will record and judge the enormous impact of this singular figure on the people and world around him.” he said in a statement.

He gave assurance that the United States is extending a hand of friendship to the Cuban people, saying: “during my presidency, we have worked hard to put the past behind us, pursuing a future in which the relationship between our two countries is defined not by our differences but by the many things that we share as neighbors and friends.”

Obama said that the death of Castro was an emotional moment for Cubans and Cuban-Americans, offering condolences to Castro’s family.

“At this time of Fidel Castro’s passing, we extend a hand of friendship to the Cuban people.”

He said that administration had “worked hard to put the past behind us.”

The United States restored diplomatic ties with Cuba in July 2015 and re-opened its embassy in Havana a month later in a historic rapprochement, ending more than a half-century of Cold War enmity with the communist island. Obama made a landmark visit to Cuba in March.

Also, the American President-elect, Donald Trump assured that his administration would “do all it can” once it takes office on January 20 to help boost freedom and prosperity for Cuban people after the death of Fidel Castro.

Trump had threatened late in his upstart campaign for the White House that concerns about religious freedom in Cuba could prompt him to reverse President Barack Obama’s moves to open relations with the Cold War adversary after more than a half-century’s estrangement.

Republicans closely await what Trump – a billionaire businessman known for his unconventional approach to politics and policy – will do on Cuba once he takes office.

“Though the tragedies, deaths and pain caused by Fidel Castro cannot be erased, our administration will do all it can to ensure the Cuban people can finally begin their journey toward prosperity and liberty,” Trump said in a statement issued from his West Palm Beach, Florida, resort where he and his family are spending the Thanksgiving holiday weekend.”While Cuba remains a totalitarian island, it is my hope that today marks a move away from the horrors endured for too long, and toward a future in which the wonderful Cuban people finally live in the freedom they so richly deserve,” he added.

At a Miami rally in September, Trump said he would roll back Obama’s Cuban policy reforms unless Cuban leaders allowed religious freedom and freed political prisoners.

“The next president can reverse them, and that I will do unless the Castro regime meets our demands,” Trump told supporters.

A bloc of mostly Republican Cuban-American lawmakers has worked to keep tight restrictions on trade and travel with Cuba for years. Some Republican lawmakers broke with party orthodoxy to back Obama’s reforms, drawn by the economic benefits of restoring ties.

But many have chafed against the changes, saying Cuba’s government was still too repressive to ease restrictions.

Florida Senator Marco Rubio, who ran against Trump to be the Republican presidential candidate, said Castro turned Cuba into “an impoverished island prison” where dissidents were routinely jailed and killed.

“The dictator has died, but the dictatorship has not,” Rubio said in a statement. “The future of Cuba ultimately remains in the hands of the Cuban people, and now more than ever Congress and the new administration must stand with them against their brutal rulers and support their struggle for freedom and basic human rights.”

Ileana Ros-Lehtinen, a senior Republican House lawmaker from Florida who fled Cuba as a child, said on CNN that Castro’s death changes nothing.

“We lost our native homeland to communism,” Ros-Lehtinen said. “They just rule over Cuba with an iron fist.”

Senator Majority Leader Mitch McConnell said he hoped Raul Castro would “turn the page” on oppression. “Freedom and democracy are long overdue in Cuba,” he said in a statement. [myad]