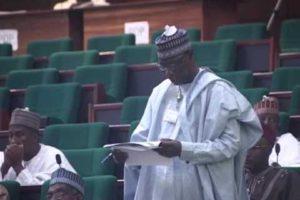 The House of Representatives has asked the Petroleum Products Prices Regulatory Agency (PPPRA) to review the current price template for Premium Motor Spirit with a view to reducing the price to N70.
This followed the adoption of a motion sponsored by Abubakar Fulata titled: “Urgent Need to Review the Petroleum Price Template.”
Moving the motion, Fulata expressed dismay over the circulating rumour of a possible hike in the price of petrol in the country.
Although the rumour was denied by the Federal Ministry of Petroleum Resources, Fulata said that it was coming at a time when the nation is going through difficult times.
According to him, the hard times are occasioned by dwindling revenues, high inflation rate, unemployment and general fall in the standard of living of many Nigerians.
The lawmaker said that the current template for the price of PMS could be reviewed downwards without affecting the profit margin of marketers and transporters.
The review would also contribute to reducing the current inflationary trend in the economy.
Fulata said: “I am aware that the current cost of freighting PMS stands at N109.1, Lightening expenses N4.56, Nigeria Ports Authority charges N0.84, NIMASA charges N0.22, Financing N2.51 and Jetty put charges at N0.60.
“Storage charges N2.00, retailers margin N6.00, transport allowance N3.36, dealers margin N2.36, bridging fund N6.20 and marine transport average put at N0.15 bringing the total cost to N137.81.”
Fulata informed the House that the landing cost of PMS remained at N119.74, while the distribution cost and margins of marketers stood at N18.37.
“Thus, the total of both the landing and distribution costs is N138.11, while marketers are allowed to sell the product within the range of N140 and N145 per litre.”
Fulata said that over 90 per cent of the current price of PMS in the country is accounted for by transport related charges at N124.34 out of N138.11.
According to him, foreign vessels charge higher for lifting the PMS because Nigerian carriers, which were supposed to lift 50 per cent of the products, lack the capacity to do so.
He faulted the NPA’s inability to dredge the ports despite collecting N0.84 for every litre of petrol, thereby costing Nigerian users the sum of N4.56 for every litre of petrol they buy.
“Bridging is supposed to be an annual event only when refineries are carrying out their turn around maintenance, which should not exceed three months.
“However, due to the fact that pipelines linking the various depots have been vandalised or in a state of disrepair, bridging has remained a permanent feature of the oil industry in Nigeria.’’
He said that if the pipelines linking the various depots and refineries could be fixed and secured, the bridging fund could be reduced to N2.00 per litre instead of the current N6.20.
Fulata said: “Also a realistic template would bring down the price of petrol to N70.04.”
The House therefore urged the NPA to dredge all harbours within a period of one year to enable ships dock in them.
The House also set up an ad-hoc committee to interface with the Federal Ministry of Petroleum Resources on the review of the price of PMS and such related matters and report back within weeks for further legislative action. [myad]