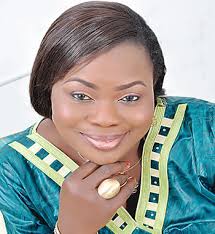 The vacancy created by the exit of the President of the Nigerian Guild of Editors (NGE), Alhaji Garba Deen Muhammad, paved the way for the emergence of the prominent female journalist and renown columnist, Funke Egbemode, to grab the position in acting capacity over the weekend.

Garba Deen is now the Group General Manager, Group Public Affairs Division of the Nigerian National Petroleum Corporation (NNPC), Abuja.
Funke Egbemode, who is currently the Managing Director/Editor-in-Chief of New Telegraph newspaper, emerged the actig President at the second quarterly meeting of the Guild’s Standing Committee, held in Abuja.
Before joining the New Telegraph, Egbemode had also worked in the Sun, Punch and Post Express Newspapers and notable Nigerian newspapers.
She also served as the Special Adviser on Media to a former Speaker of the House of Representatives, Patricia Olubunmi Etteh.

Meanwhile, the former Abia state governor and Publisher of the Sun titles, Dr. Orji Kalu, has hailed the emergence of Funke Egbemode as the Acting President of the Nigerian Guild of Editors.
Kalu described Egbemode as a veteran journalist who has contributed immensely to the media industry, adding that she has the capacity to steer the affairs of the Guild.

Kalu is sure that the new President would bring to bear her vast experience and network of contacts.
In a statement signed by his Special Adviser, Kunle Oyewumi, Kalu said: “I received with joy the news of the emergence of one of my colleagues, Mrs Funke Egbemode as acting President of the Nigerian Guild of Editors (NGE).
“Her emergence is not a surprise to many Nigerians who are conversant with her media endeavours.
“Having served in various capacities and positions in the world of journalism, there is no doubt in her capability to sustain the good name of the professional body.
“Mrs. Egbemode has over the years created a niche for herself in the media industry and as such her new role as acting President of NGE is in the interest of the professional body.”
The former governor advised media professionals to exhibit a high level of professionalism in the discharge of their duties, adding that the strategic importance of the media cannot be undermined in the society.
He said the media is the voice of the voiceless even as he commended the Guild for being gender-neutral in its appointments. [myad]