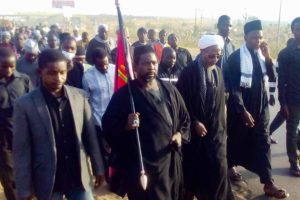 The Kaduna state Government has formally declared the Islamic Movement of Nigeria (IMN), otherwise known as Shiite as an insurgent group.

In a White Paper, released today, Monday in Kaduna, the state government warned that IMN members would henceforth be treated as an insurgent group.

“For all intent and purpose, the IMN is an insurgent group and ought to be treated as such.”

The White Paper also declared that the detained leader of the Shi’ite sect, Ibrahim El-Zakzaky would be held responsible for all acts carried out by the group’s members.

“Members of the IMN owe absolute loyalty to Sheikh Ibraheem El-Zakzaky. He therefore bears responsibility for all the acts of lawlessness committed by the organization and should therefore be held responsible, fully investigated and prosecuted,” the government said. [myad]