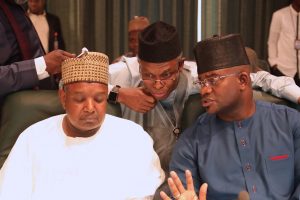 The Kogi State governor, Alhaji Yahaya Bello, was said to have involved in an auto accident leading to a leg injury, as a result of which he now walks with clutches.

The governor appeared today, at Aso Villa Presidential Villa to attend the All Progressive Congress (APC) governors meeting with President Muhammadu Buhari. He was walking with clutches on his two sides. His left foot is swollen up and heavily bandaged.

Information had it that governor Yahaya Bello was returning from Abuja last Friday, being driven in a BMW saloon car when the accident happened around the Lokoja market area.

Governor Yahaya Bello was returning from Abuja after the caucus and the National Executive Committee (NEC) meetings of the APC with the intention of attending the funeral of the late Deputy Majority Leader of the House of Representatives, Hon Buba Jubril. But the accident prevented him from attending as he was immediately rushed to an undisclosed hospital and was represented at the funeral by his deputy, Simon Achuba.

The Director General, media and publicity to the governor, Kingsley Fanwo, confirmed the incidence, saying that the governor injured his leg as he “missed his footing.”

A statement by the media aide said Yahaya Bello injured his left foot while alighting from a vehicle, denying the allegation that the governor had been flown abroad for medical attention.

The statement read: “We wish to refute rumours that the Governor of Kogi State, His Excellency, Alhaji Yahaya Bello is either hospitalised or otherwise incapacitated.

“The Governor missed his footing last Friday, March 30, 2018, while alighting from a vehicle and injured his left foot. He was treated by his doctors, who bandaged the leg and discharged him.

“We thank all the Governor’s supporters and well-wishers who reached us to inquire after his wellbeing. His Excellency is doing very well and will be at work as usual after the Easter holidays.” [myad]