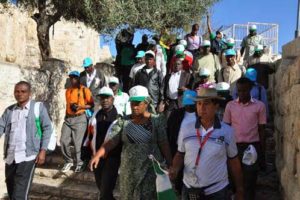 The Minister of the Federal Capital Territory (FCT), Malam Muhammad Musa Bello has advised Christians who are on Pilgrimage to Jerusalem, to use the opportunity to engage in spiritual rejuvenation.
The minister, who spoke today, Wednesday, at a farewell ceremony for the 2016 contingent of the FCT Christian pilgrims to Jerusalem, Israel at the Nnamdi Azikiwe International Airport, Abuja, also sked them to pray for Nigeria and its leadership.
Muhammad Bello reminded them that this is a once in a lifetime opportunity and that they should be used for spiritual rejuvenation and to pray for themselves and the nation.
The Minister advised the pilgrims to reflect on the time and amount of money spent to prepare for the journey, saying that they should have the determination to return to Nigeria as good citizens.
According to him, the spiritual change and awakening during this blessed journey would go a long way to transcend the entire community and making the country a better place.
He advised the pilgrims to be guided and humbled by the God given opportunity to embark on this religious journey, having in mind that all in this life is vanity.
The Minister noted that Israel is a Holy Land for all Abrahamic religions such as Judaism, Christianity and Islam, which should be a reason to make us to be more united.
“We are all children and offspring of Adam and Eve and therefore we should be united for the good of the entire humanity.”
Speaking at the occasion, the Senator representing the FCT, Philip Tanimu Aduda, urged the pilgrims to be good Ambassadors of the FCT and the country even as extolled the people-oriented policies and programmes of the FCT Minister.
The Minister of State for Aviation, Senator Hadi Sirika, asked the pilgrims to shun anything that can hinder the unity of the country.
“We are all one, because no one can be a Muslim without believing in Jesus Christ.” [myad]