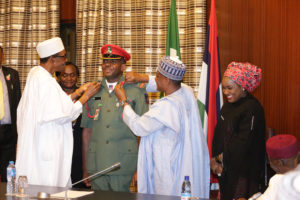 President Muhammadu Buhari has made it clear that for modern soldiers to achieve victory in warfare, they require superiority of intellect and imagination

The President, however, called on the officers to ensure the translation of academic achievements to performance in the field and other places of assignment.

“I am happy with the intellectual approach of the military.  In our time, there was no time for academic pursuit.  It was all about war, coups and counter-coups.”

President Buhari said in times of peace and stability, military officers should use such opportunity to pursue their intellectual transformation which should go side-by-side with hardware transformation of modern armies.

See also:  We Won’t Depend Much On Grid In Effort To Electrify Nigeria - Osinbajo

He asked officers to read History, irrespective of their academic backgrounds, describing it as an important pre-requisite for strategic learning and success in the military.  He emphasized that the good quality of the officer corps of the Nigerian Military calls for good performance.

President Buhari congratulated both officers on their various achievements in their services and urged them to always be mindful of the welfare of those placed under their command.

Both Air Vice-Marshal Kaita and Colonel Abubakar have, prior to their current assignments, served the country in peace-keeping missions abroad and are married with families. [myad]