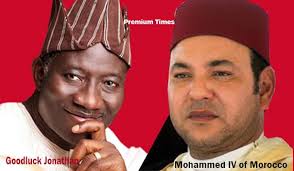 Diplomatic relationship between Nigeria and Morocco appeared to have worsened as the North African country announced the immediate recall of its ambassador from Nigeria, in reaction to a statement from the Nigerian government that the Moroccan monarch actually had a long time telephone conversation with President Goodluck Jonathan, contrary to the news that made round that the Moroccan King had snubbed Nigerian President.
King Mohammed VI was said to have turned down a request by President Jonathan for a telephone conversation and possibly, an invitation to Nigeria, describing the move as “inappropriate.”
The Moroccan Foreign Ministry described the request by President Jonathan (for telephone conversation) as a devious move to curry electoral favour than a genuine diplomatic move.
“The request by Nigerian authorities for a phone conversation between His Majesty, King Mohammed VI and Nigerian President was refused by the Monarch who deemed it inappropriate on grounds of the upcoming elections in Nigeria,” the statement said.
However, on Monday, the Nigerian Ministry of Foreign Affairs issued a statement refuting the claim of the Moroccans. The Nigerian foreign ministry claimed that King Mohammed IV of Morocco spoke to President Jonathan from France where he had gone for a visit.
The Ministry of Foreign Affairs also denied that the phone call was intended to confer electoral gains on Mr. Jonathan who faces a crucial electoral challenge from an invigorated opposition in two weeks.
“Since the King was in France and not in Morocco, both leaders spoke extensively over the telephone on matters of mutual interest and concern that have nothing to do with the conduct of re-scheduled elections in Nigeria.
“It is therefore preposterous to suggest that Mr President’s telephone call to the Moroccan monarch was intended to confer any electoral advantage on the President,” the statement said.
The North African nation responded furiously by denying the claim by the Nigerian authorities, resulting in recalling its ambassador from Nigeria.
The office of Mohammed VI denied the king ever spoke to the Nigerian President, saying in a statement that Nigeria’s claim that a discussion took place between King Mohammed and President Jonathan was “unethical practices.”
The statement said in the “clearest and strongest terms” that “there has never been a phone conversation” between the two leaders.
“The King’s Office categorically denies the false allegations made by Nigerian authorities about an alleged phone conversation between the Sovereign and Nigerian President,” the statement said.
The Moroccan foreign ministry also rejected the position of its Nigerian counterpart in a separate statement.
“The king has actually declined the request of the Nigerian government because it is part of the internal electioneering and this country’s fundamentally hostile positions with regard to the territorial integrity of the Kingdom,” the ministry said.
“The kingdom of Morocco expresses its astonishment and denunciation to these unethical practices that are contrary to the spirit of responsibility that must prevail in relations between states.”
Morocco said it was recalling its ambassador for “further consultations”.
Nigeria and Morocco have a history of frosty diplomatic relation due to the former’s support and recognition of the Sahrawi Arab Democratic Republic declared by the separatist group, the Polisario Front.
The Polisario Front, which is backed by Morocco’s neighbour, Algeria, seeks an independence for the Western Sahara region of Morocco, a move the Monarch has violently resisted.
While Nigeria’s foreign ministry claimed the conversation took place, a top official of the government confirmed that indeed President Jonathan was rebuffed by the Moroccan leader.
The official, however denied that the president’s proposed telephone call had to do with politics. He said Jonathan had earlier spoken to Algeria’s President Abdelaziz Bouteflika, and also wanted to reach out to Morocco on issues of mutual interest. [myad]