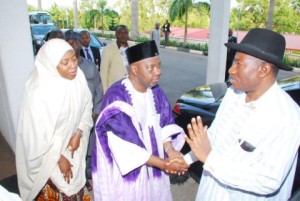 The immediate younger brother to Arc Mohammed Namadi Sambo the Nigeri’s Vice President of the Federal Republic of Nigeria, Captain Yusuf Sabo Sambo is dead.
He died today in auto crash on the Bill Clinton drive, Airport Road Abuja.
Details of the accident was scanty, but a statement from the Vice President’s senior special adviser on media and publicity, Umar Sani said that Captain Yusuf was a qualified pilot who worked with the former Nigerian Airways and the Presidential Air Fleet before retiring to be on his own.
The statement said that the deceased was born in 1956, adding that is survived by his wife, three daughters and 10 brothers and sisters.
He has since been buried at the Apo cemetery, Abuja according to Islamic rites, in the presence of former military President Gen. Ibrahim Babangida, former Head of State, Gen. Abdulsalami Abubakar and several other dignitaries and sympathizers.
Meanwhile President Goodluck Jonathan was the first to pay condolence at the Aguda House residence of the Vice President in the Presidential Villa, Abuja, to personally condole him over the sad event.
President Jonathan who led his wife, Dame Patience Jonathan and several other top government functionaries to the VP residence expressed shock over the incident and prayed God to give the family the fortitude to bear the loss.
The President who got the news while on his way back to Abuja from Bayelsa described the car crash as an “extremely sad event. ”
President Jonathan who said Capt Sambo was also his own younger brother, added that such people are needed at a time he and the Vice President are busy attending to national issues.
The President also condoled the government and people of Kaduna State over the loss.
Responding, the Vice President, who just returned from an official trip to Tanzania  thanked the President for the visit.
He described his late brother as one of the most experienced pilot in the country who was very hardworking.
According to Sambo, he and his team were about to leave Tanzania when the news hit them.
When the Vice President landed at the airport, he had to move straight to the National Mosque for the prayers and after then to the cemetery for the burial.
Also present at the residence were  Inspector General of Police, Mohammed Abubakar, FCT minister, Bala Moh’d, and Minister of State for Defense  Musiliu Obanikoro.
Others were foremost businessman, Arthur Eze, Kaduna governor, Mukhtar Ramallan Yero, NSCDC boss, Ade Abolurin, Minister of Defense, Aliyu Gusau, former Minister of Defense,  Haliru Bello Moh’d, National Security Adviser ( NSA), Col Sambo Dasuki, Head of Service,  Goni Bukar Aji, Minister of Special Duties, Kabiru Turaki and many others.