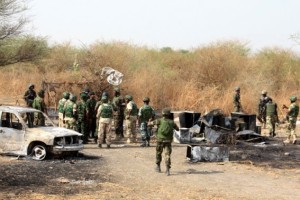 The Chief of Defence Staff, General Gabriel Olonisakin, has said that the move to take over the Sambisa Forest from the notorious Boko Haram insurgents has commenced with the establishment of an operation tagged: “Operation Crackdown.”
General Olonisakin who fielded questions today, Sunday in Maiduguri, the capital of Borno state, from newsmen after he inspected some military fighting equipment at the headquarters of the Threatre Command, Operation Lafiya Dole, said that alongside the operation crackdown, “Operation Safe Corridor Initiative,” has been put in place for the terrorists to surrender.
“That is the corridor for them, terrorist to surrender. That corridor is always open. However, we will not wait until they surrender, that is why operation crackdowns, to ensure that we take over the Sambisa, clear the terrorists from those places and make the place safe for development.”
The Chief of Defence Staff said that he was in Maiduguri for operational visit to encourage the troops to continue the fight and commend their efforts so far.
He also commended the Chief of Army Staff, Lieutenant General Tukur Buratai, for ingenuity and creativity in the war against insurgency in the North East.
Before embarking on the inspection, the Chief of Defence Staff  had met behind closed doors with the Chief of Army Staff; Commander, Theatre Command, Major General Lucky Irabor, and senior military officers at the headquarters of the Threatre Command.
General Olonisakin also visited wounded soldiers at the 7 Division Hospital at Maimalari Cantonment. [myad]