Home FEATURES We Have No Confidence In Nigeria Police, Army, DSS – Governor Wike 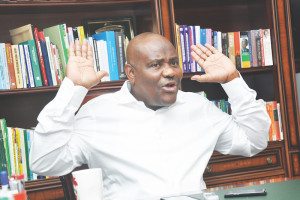 “Rivers people must work as brothers and sisters and defend our interests. We don’t have Police, we don’t army, but we have God. And so, we must put our house in order and be our own police, be our own Army.

Rivers State Governor, Nyesom Wike made, who led thousands of Rivers people on a victory March across the streets of Port Harcourt, which terminated at the Government House, Port Harcourt,  commended the people for standing up in defence of democracy and the interest of the State.

He praised Rivers people for their courage “in the face of murderous invading security agencies who killed, maimed and stole ballot boxes in their bid to subvert the will of the people.”

Governor Wike said that the ultimate sacrifice made by the Rivers people brutally murdered by the Nigerian Army and SARS personnel was for the defence of the collective interest of the state, “because they refused to be conquered by the invaders.

“I have told the security agencies, you come and collect security money from me and use it against Rivers people. Enough is enough. They will now be depending on NDDC for their funding. Let me see where it will take them to.”

The governor said that politicians like the Minister of Transportation,  Chibuike Rotimi Amaechi, who were not on ground, would never win elections in Rivers State, adding that those who attempted to re-colonise Rivers State by donating monies from their state governments had been shamed by the vigilance of the people.