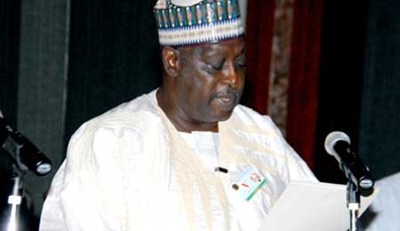 The Secretary to the Government of the Federation (SGF), Babachir David Lawal, has painted a gloomy picture on the 2016 controversial federal budget, telling the Senate that there is no guarantee for the implementation of constituency projects in the budget.

The SGF who appeared on Wednesday before a joint Senate committee on Appropriations, Finance and Ethics, Privileges and Public Petitions, made it clear that the  Federal Government cannot fully implement the N6.06 trillion 2016 budget as passed by the National Assembly because the projected revenues of the government had dropped by 50 to 60 per cent.

See also:  Buhari To CBN: Don't Grant Any Request For Funds For Importation Of Food, Fertiliser

“Government based its principle on zero budgeting this year. Funds will be released to finance key projects in line with the implementation plans of the government. I will explain why it will be hard for the government to implement the budget.

“I spoke with the Minister of Budget this morning and I asked him the revenue base of the government. We are now receiving about 50 to 60 earnings from what we projected.”

“Some Ministries, Department and Agencies (MDAs) might find it impossible to implement projects appropriated in their budgets. We have to re-prioritize. I like us to understand that this is the background upon which I made that statement. “

He pointedly blamed the drop in Nigeria’s revenue on activities of militants in the Niger Delta even as he said that the oil benchmark of $38 per barrel fixed by the Federal Government has been drastically dislocated.

He added that the benchmark has been grossly affected by activities of militants in the Niger Delta. [myad]