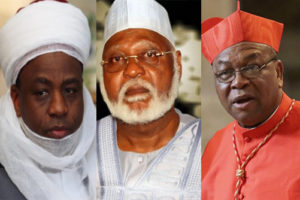 Secretary-General of the King Abdullah bin Abdulaziz International Centre for Inter-religious and Intercultural Dialogue (KAICIID), Reverend, Dr. Agatha Ogochukwu has made it clear that there is no religion in the world that call for violence and hatred.

Ogochukwu, who spoke today, Thursday in Abuja at a 2-day African Union Interfaith Forum, with the theme “Leap of Faith: religious leaders advance justice, peace, security, inclusiveness, dialogue and development in Africa,” emphasised: “no religion calls for violence and no religion tolerates hatred in its name.”

He regretted however that in many countries of the world, the manipulation of religion and religiousidentity for violence is leading to divisions in societies, communities, families.

“The religious leaders tell us that those who manipulate religion to incite violence are motivated by greed, or by political or by personal motives.  They do not speak in the name of any religion.

He said that a recent study conducted by the organization with partners showed that young people join Boko Haram in Nigeria because they are misled or because they seek social, political or economic gain.

Rev. Ogochukwu said that religious leaders need to have a seat at the dialogue table and that they need to be able to discuss with policymakers, to share joint concerns, and to learn from each other.

“They need to be able to collaborate, not only with each other, but with all sectors of society.

According to Rev. Ogichukwu, many of these societies have for centuries been models of interreligious coexistence and collaboration, saying: ”religion acts as a force for good for millions of believers around the world.”

He said that KAICIID was founded by the Kingdom of  Saudi Arabia, the Kingdom of Spain , the Republic of Austria, together with the Holy Sea as the Founding Observer, as a result of the vision of and the Custodian of the Two Holy Mosques, King Abdullah Bin Abdulaziz of Saudi Arabia, and His Holiness Pope Benedict.

“They agreed in their historical meeting in 2007, to be partners in an organization that builds bridges between cultures and religions. We are now the only intergovernmental organisation dedicated to promoting interreligious dialogue.

“We, at KAICIID, believe that humanity is best served when policy makers and religious leaders work together to reinforce the positive role of religion in achieving stability and social cohesion, and to combat extremism and violence.

See also:  After My Second Tenure, I May Become A Pastor, – Gov Abiodun Of Ogun

“Hence policy makers and religious leaders have an important role in our governance structure and, therefore, are also essential in all our programmes.

Our Council of Parties is made up of policy makers from our founding members, Austria, Saudi Arabia, Spain and the Holy See as the founding observer.

“Here in Abuja, KAICIID convened dialogue in September between representatives of the Muslim and Christian communities in Nigeria. They spoke of interreligious cooperation to foster peace and reconciliation.

“We partnered with the Institute of Peace and Conflict Resolution and the Inter-faith Mediation Centre.

“In the Central African Republic we support the Interfaith Peace Platform created by the courageous Catholic, Evangelical and Islamic leaders. Their goal and ours is to help these communities work together for the sake of peace in the country.

“In order to achieve that goal we also work through inter-religious platforms. We have facilitated dialogue between Muslim religious leaders, representatives from Muslim women and youth groups. The action plan they agreed will help create a cohesive Muslim platform.”

Meanwhile, the Catholic Archbishop of Abuja Metropolitan See, John Cardinal Onaiyekan, and the Sultan of Sokoto, Alhaji Sa’ad Abubakar III, have, at the occasion, called on religious leaders in Africa, and Nigeria especially, to be mindful of their utterances to their followers, as development cannot be attained in an atmosphere of conflicts.

The Sultan also called on Muslims and Christians who constitute about 90 per cent of Nigeria’s population to constructively engage those in authority to be just and fair to all Nigerians no matter their faith and religion.

He was represented by the Wazirin Katsina, Alhaji Sani Lugga.

He stated: “Religious leaders in the continent have prominent roles to play in achieving the needed peace.” [myad]