Home FEATURES Oshiomhole Bows Out As Obaseki Steps In, Vowing He Has Hit The... 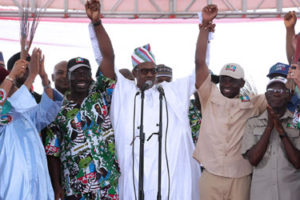 Adams Aliyu Oshiomhole, today, bowed out as governor of Edo state, after eight years in the saddle, even as Godwin Obaseki, stepped into his shoes, with a declaration that he had hit the ground running in delivering on the promises he made to the people of the state, during his governorship campaign.

Obaseki said that he is fully aware of the enormous task before him regarding the pursuit of the good and well-being of the people and the state, which he said he would pursue with vigour and diligence.

The new governor, in his inaugural address shortly after taking his oath of office as the fifth elected governor of Edo at the Samuel Ogbemudia Stadium, Benin said: “the responsibility of leading the match of Edo people is mine, that of my deputy governor and that of my government I would be announcing shortly. Many of the fundamental, major socio-economic development have been put in place by (Adams) Oshiomhole.

“I am looking forward to you to make our government accountable every step of the way.‎ As we have always said, our message is simple – let’s go further together. Our work starts immediately.”

Obaseki promised to focus on human and material infrastructure, even as he assured that he would ‎build on the foundation laid by his predecessor, whom he lauded for his developmental efforts across the state
Obaseki and his deputy, Philip Shuaibu, took their oath of ‎office, which was administered by the Chief Judge of the state, Justice Cromwell Idahosa, and later inspected a guard of honour before receiving cheers as he (Obaseki) rode in a motorcade.

See also:  My Husband Is Toast Of Any Woman, Aisha Buhari Confesses

‎The ceremony was graced by important personalities drawn from all walks of life, including a former Head of State, retired General Yakubu Gowon; the immediate past governor, Adams Oshiomhole, and his wife, Lara; the immediate past deputy governor, Dr. Pius Odubu; National Chairman of the All Progressives Congress (APC), Chief John Odigie-Oyegun; Deputy National Chairman (South) of the APC, Segun Oni,‎ and a former Governor of Ogun State, Chief Olusegun Osoba.