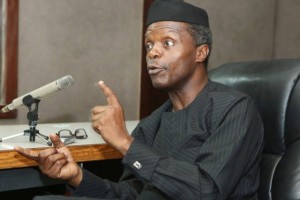 Vice President Yemi Osinbajo has expressed surprise that militants in Niger Delta are knowingly destroying their land all in the name of scoring political point.
The Vice President who said that if they are damaging pipelines and oil installations because of President Muhammadu Buhari, they should know that he would not be there forever whereas their land which they are destroying would remain permanently destroyed.
Speaking today, Tuesday, while receiving a delegation of Urhobo leaders at the Presidential Villa, Professor Osinbajo said: “so much damage is being done; governments will come and go, but this damages will ultimately destroy people’s livelihoods, aspirations and their future.
“Nobody else anywhere in the world will destroy the facilities meant to help them, there is no benefit whatsoever from the destruction.”
The Vice President stressed that the Buhari administration would continue its outreach to leaders and groups in the Niger Delta to seek for peaceful solution to the crisis, even as he called for understanding, especially on the part of the leaders of the region.
Vice President Osinbajo said that President Buhari is someone that can be trusted once he gives his word, saying: “he is quiet, but fiercely determined, once he makes up his mind and gives his word.” The Vice President encouraged the Niger Delta people to work with the President.
He commended the Urhobo Leaders, led by its president, Chief Tuesday Onoge and the APC’s Gubernatorial Candidate in the 2015 elections, Olorogun Ortega Emerhor, for their understanding.
Earlier, Chief Onoge said that if the money sent to the Niger Delta in the last 16 years were judiciously spent, the people of the region would have benefited.
He then asked: “what happened to these monies?”
He pledged the support of his group to the Federal Government, even as they condemned the vandalisation of oil and gas installations in the Niger Delta and offered to assist in furthering peace in the area. He said that the group supported the anti-corruption efforts of the Buhari administration.
Meanwhile, the Vice President has said that the Federal Government is ready with the counterpart funding for the designated railway constructions: Lagos-Kano and Calabar-Lagos lines.
He spoke during a courtesy call on him by the new Chinese Ambassador to Nigeria, Mr. Zhou Pingjian.
He said that the relationship between Nigeria and China is getting stronger and strategic. The Chinese envoy in his remarks said trade between both countries has increased and described Nigeria as “giant of Africa.” [myad]