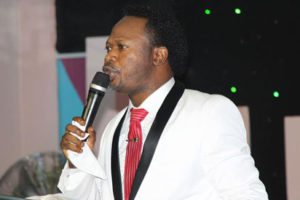 Senior Pastor of Champions Royal Assembly, Chikakore-Kubwa, Abuja, Pastor Joshua Iginla has bank-rolled the trip of a Muslim lady, Jamila Yusuf to India for surgery after she was allegedly bathed with acid by her boyfriend
Pastor Iginla, who had earlier given out N5 Million out of the N10 Million Jamila needs for the surgical treatment in India, on Sunday, added another N5 Million to complete the N10 million he had promised.
The pastor had earlier given opportunity for others to contribute to saving her life but, only N900,000 was contributed from such other people.
The Senior Pastor has also processed Jamila’s Passport and Medical Visa as well as Passports and Visas for her brother and Dr. Eghosa who are accompanying her.
Jamila’s medical trip to India is for a reconstruction surgery.
“I am told by medical Doctors they might stay in India for up to three months.
“So by this week, they are travelling to India and when they come back, we will update you again to see what has been done.
“They have gotten the Visa and her brother’s and Doctor Eghosa’s who will accompany her there.”
The money in Naira, Dollars and Rupees bills was publicly handed over to Jemila immediately at d Church.
Pastor Joshua Iginla stressed that he did not know Jamila from anywhere but was only showing love to her, adding that his gesture was not to convert Jamila from Islam to Christianity.
“I want to tell you that I don’t know our sister and I need to stress that the money I am giving her is not a bait to turn Jemila from Islam to Christian.
“That’s why we did not give her Bible and we are not stopping her from going back to Muslim when she comes back but we are saying women should be respected and protected.
“It is not about converting her but about who is my neighbour. My neighbour is the one who needs my help and who I can render help.
“This is just the little we can do to preach love to all human race whether Christian, Muslim, Hindu or any religion or tribe.
“It is still a problem in Nigeria to help people outside of your religion or tribe; it is a tradition to help only people from your tribe or religion,” he said.
Jamila’s doctor, Doctor Eghosa has said that all arrangements have been concluded for Jamila and the team to leave for New Delhi, India.
“Through Papa, we have made arrangement with Fortis Hospital in New Delhi and will be leaving this week by the grace of God.
“She will have cosmetic approach for the neck and also surgery for the eyes and the cost will be about N10 million or more,” Dr. Eghosa said.
According to him, the team of Doctors to carry out the reconstruction surgery had been contacted and were set to carry out the surgery. [myad]