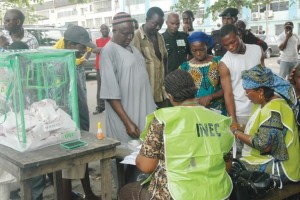 The Peoples Democratic Party (PDP) has won two Senatorial seats in the Rivers re-run elections held at the weekend.

The seats are the East and West senatorial districts, with George Sekibo winning the East while Osinachukwu Ideozu won in the West.

Sekibo defeated Andrew Uchendu of the All Progressives Congress, APC. He polled 93,098 votes to defeat Uchendu who had 34,193 votes.

But there was confrontation between PDP members led by Governor Nyesom Wike and security operatives before the final result was declared at the Port Harcourt City Council Hall.

Wike mobilized his party members to the venue of the collation centre to demand declaration of the result. The people defied security operatives who were shooting sporadically. They believed there was a plot to change the result in favour of Uchendu.

“We are ready to die, nobody can change our result,” the PDP members shouted.

Sekibo is going to the Senate for the third time. He was first elected to represent Rivers East in the Senate in 2007. Previously, he was in the House of Representatives between 2003 and 2007, representing Ogu/Bolo/Okrika Federal Constituency.

Also the INEC declared Osinachukwu Ideozu, winner of the of the Rivers West senatorial district. He was certified winner with 107,166 votes. He defeated Otelemaba Amachree of the All Progressives Congress (APC), who garnered 48,898 votes.

Rivers West Senator-elect, Ideozu, was a member of the Rivers State House of Assembly, representing Ahoada West between 1999 and 2003. Afterwards, between 2003 and 2007, he represented Abua-Odual/Ahoada East Federal Constituency in the House of Representatives before his appointment as Commissioner for Education. [myad]