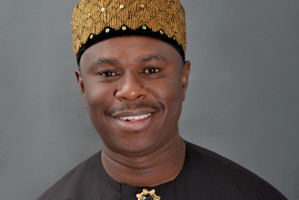 “As we continue with the national quest for answers to the great questions of our time, I urge that we do a self- assessment of where we stand as nation.”
The All Progressives Congress (APC) Governorship candidate in the 2015 election in Rivers state, Dr. Dakuku Peterside made this poser today, Friday, at this year’s University of Nigeria Nsukka (UNN) Distinguished Persons Annual Lecture of the Faculty of Management in a lecture titled: Connected Vision: Building Blocks of a New Nigeria, at the Enugu Campus of the University.
Peterside, who is currently the Director General of the Nigerian Maritime Administration and Safety Agency (NIMASA), said that at present Nigeria has no what he called: “CONNECTED VISION.”
He argued that vision is the key driver of any endeavour, saying: “this original haziness in what constitute the overriding national vision has constantly plagued our national development in nearly every sphere. My key observation here and operating thesis therefore is that a nation can only endure if it is founded on an integrated and comprehensive vision (connected vision). Nigeria unfortunately missed that opportunity at inception.
“This original ‘sin’ has multiplied and contributed to the ever so frequent quest for a new nation founded on a new vision.”
Dr. Peterside said that Nigeria’s challenges were historical, recalling that what the British ceded in 1960 was a complex outcome of negotiated settlements among Nigerian elite, representing first and foremost, their respective regional and ethnic interests. “There was no pan Nigerian interest or pan Nigerian Agenda. There was no “CONNECTED VISION.”
Dr. Peterside however said that visions can be corrected even though it is a difficult endeavour.
The NIMASA Director General said that hope in a Nigeria connected by vision is in the horizon if the nation will retrace its steps and focus on the factors that can make Nigeria great.
“The factors that have been identified are put forward as a guide for this assessment. The solutions we endlessly seek would seem right at our doorsteps. But there is a great amount of political will to do what is necessary.”
Peterside commended the Muhammadu Buhari administration for its anti-corruption efforts, emphasising: “this is one area where there is a growing national consensus in Nigeria that the administration of President Muhammadu Buhari has displayed unusual courage. “There are divergent views as to the effectiveness of current measures but many agree that it required a lot of courage to make a start. It is hoped that the Nigerian public will appreciate the significance of this effort in the overall improvement of the quality of governance in the country.”
The NIMASA boss said that the development of the capacities and capabilities of people is perhaps the greatest investment any nation can make because, a well-educated citizenry can conceptualise and implement sound economic policies based on its peculiar realities of geography, natural and human resources.
Full text of his lecture is reproduced here”