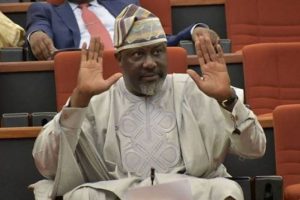 The Nigeria Police Force has threatened to declare the Senator representing Kogi West, Dino Melaye and Alhaji Mohammed Audu wanted if they refuse to comply with court order.

Senator Melaye and Audu are expected to appear before the Federal High Court, Lokoja, on March 28 to answer criminal charges against them.

Force Spokesman, Jimoh Moshood in a statement said that the duo’s refusal to appear in court would force it to obtain warrant of arrest or declare them wanted throughout the country and on INTERPOL platform.

A political thug, Kabiru Saidu, a.k.a Osama, had confessed last week that Melaye handed over a bag containing one AK47 rifle, two pump action guns and the sum of N430,000.00 for him to share with his boys.

Moshood said that the indictment of both politicians has led the Force to invite them for questioning.

“Working on actionable intelligence, the Kogi State Police Command personnel and operatives of the Federal Special Anti-Robbery Squad trailed and arrested two suspects – Kabiru Saidu a.k.a Osama, 31, From Dekina local government area of Kogi State but based in Anyagba (Leader of the gang) and Nuhu Salisu a.k.a Small, 25, (a member of the gang), after a gun battle with the police team that lasted for some hours on the 19th January, 2018 at Ogojueje in Dekina LGA.

See also:  We’re Yet To Get Evidence Of Soldiers Shooting At Lekki, Lagos – Nigerian Army

“During investigation, they confessed to the various criminal roles they played in the commission of several kidnappings and armed robbery, murder and other violent crimes in different parts of Kogi State for which they have been on the wanted list of the police for more than two years now.

“Saidu further confessed to the police investigative team that Senator Dino Melaye handed over a bag containing one AK47 rifle, two Pump Action guns and the sum of N430,000.00 to share with his boys.

“The police conducted investigation into the criminal indictments against Melaye and Mohammed Audu and discovered that the two of them have case to answer.” [myad]