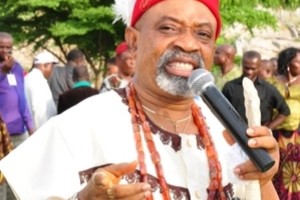 Former governor of Anambra state and currently Minister of Labour and Employment, Dr. Chris Ngige, has warned his fellow Igbos that politics of self-alienation would not make way for Ndigbo to have a shot at the Presidency when their time comes.

Ngige disclosed that there was an understanding that the presidency would go round the major ethnic groups in the country, stressing that Ndigbo could get their turn by embracing other parts of the country with open hands and not politics of alienation.

Speaking with journalists at the weekend during the annual convention and 2016 graduation ceremony of Skill Acquisition Students of Bina Foundation, Enugu, Ngige further warned Ndigbo against politics of alienation. He asked them to embrace other parts of the country with open hands.

Reacting he statement made by the Secretary-General of Ohanaeze Ndigbo, Dr Joe Nwaorgu that President Muhammadu Buhari was promoting politics of exclusion against the people of the Southeast, the former Anambra strong man dismissed the allegation, saying that Buhari loves Ndigbo.

“I am sure the statement did not emanate from Ohanaeze. It is the personal opinion of the Secretary General, Dr Joe Nwaorgu, my personal friend. Ohanaeze has a means of expressing its views in a press statement by the President General and such a statement must emanate from Imeobi (inner caucus).

“When you go to Buhari’s antecedents, you see his love for Igbos. His Brigade Commander was an Igboman. After the war, he did not kill Prisoners of War. He brought back his classmates, J.C. Ojukwu and the other man from Ojoto in Anambra State. He is a good man. He keeps to himself. He is disciplined in office.

“He doesn’t drink. He doesn’t smoke. He is a man who does any work efficiently. He has Igbo friends. It is wrong to say that Igbos didn’t vote for him in 2015. There was no voting across Igboland. It was vote allocation.

“I don’t want to join issues with him (Nwaorgu). I have held various positions in Ohanaeze before him. I championed Aka Ikenga. His Igboness is not stronger than mine. It is still very early. We should stop crying over spilt milk.

“We got 20 pounds after the war. We should leverage on our prosperity, industrial spirit, ingenuity and propensity for work to forge ahead. We need political fitness and diplomacy and we will not be left behind.

“Former Vice President, Alex Ekwueme has done a lot in successive constitutional conferences on the zoning structure and regional cooperation. I have always espoused that at Aka Ikenga. We do it and the rest shall be added unto us.” [myad]