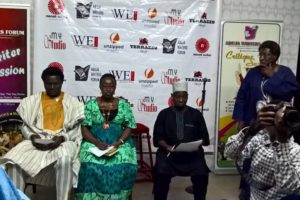 Words, spoken, sung and written, are a veritable garden of creativity that the organizers of the monthly Guest Writer Session have tended, nurtured and celebrated in all their fecund and variate glory for the past eight years.

The October 29 evening’s stroll through that garden led us to the sharp sweet aroma of an author’s first flowering, through the earthy sounds of deep thinking, soul rocking modern folk music and on to the thorny cacti of desert-born poetry.

With her reading from “The Crippled Eagle” her debut, Doris Malgwi gave warning of her determination to master the garish, often blood red petals of her chosen metier, the crime thriller also known as pulp fiction.  A genre that makes little or no claim to elitist status, the crime thriller is typically fast-paced, high adrenaline ‘action’ homily on crime and corruption in high and low places and Mrs. Malgwi and her heroine , a Baju girl with guts named Kaingchat, delivered on all fronts.

It is not this writer’s place to give “The Crippled Eagle”a blurb but publishers Omojojolo Emotion Press packaged her opus quite elegantly and Mrs. Malgwi gave her yarn of derring-do and danger a sheen that marks her as a name to watch out for.  It would be remiss of one not to point out that the novel shares a somewhat less savoury trait of the pulp fiction genre, less than perfect proofing and editing. It is not so bad as to mar the thrilling experience but a poodle popping up on the very first page where a puddle was meant to be is a distraction. The kind that will not show up we hope in here eagerly awaited sequel to her exciting debut.

No garden worth its name would be without song and on this stroll it was singer, composer, songwriter and baker,  Ashida that wove the magic of impassioned folk song and social commentary into the ambience. Baritoned and deep thinking Ashida Dele brings to mind the hopeful subversives of the hippy era in a way that is young and fresh and now.

Much like the pioneer folk song Noble Laureate, this gift to the music industry from Ondo state layers his unique development-focus into the hybrid of highlife and what is best termed Middle belt soft rock. Indeed the strains of the high plateau on which he spent much of his youth were plain to be heard from his guitar play, and in the cadence of his vocals.

A true minstrel of his times, Ashida asks the deeper questions of us. In his rendition of his latest single “ Africans “ he asks us to reconsider the murky direction we seem to be charging towards and the frenzied pace we are scurrying nowhere with.

Then came the desert blooms. The impassioned poetry of Musa Idris Okpanachi transited the audience from the pondering of the errors of our ways as a society to staring bleakly at the agonizing consequences of not learning from our myriad mistakes.

His offering from the strikingly named collection of his poems “Music of the Dead” was a vivid blossom of the pain and triumph of parenting and persevering in the Boko Haram ravaged north-east.

The love song “Shareef” was emblazoned with the rich vocabulary of a doctorate in English language and spoke in intensely personal tones of a universal that is the bedrock of humanity . The love of parent for son, and  the hope of one generation for the continuation of the lineage.

The intensity of his imagery misled a few in the audience to hear erotica in passion, to input the sensual into the paternal. Given the context of the poem that Dr. Opkanachi shared during the question and answer session the coquetry that they imputed to the  poem most have hurt and inspired in the same breathe.

He explained his third son Shareef had battled back to life from a devastating motorbike accident in the city of Maiduguri at a time whence tragedy was all around and the music of the dead … gunfire, explosions and artillery fire … was all too often the lullaby that his injured son and his care givers fell to fitful sleep.

I do believe though he found solace in the acclamation with which his work was received and the near stampede for autographed copies of it.

And so our stroll through the fecund, rich garden of Nigerian modern literary creativity for that evening yet not before a lucky many won editions of works from contemporary poets, authors and songsters in the monthly raffle draw. Fruit from the garden as were. Thankfully the tour , courtesy of the Abuja Writers Forum , repeats itself every last Saturday of the month in case you ever wish to sample the garden’s delights.

Adeyemi wrote in from Abuja. [myad]