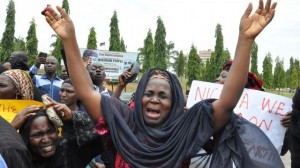 Nigeria Presidency, today, shot the gates of Aso Villa, the seat of government, to the former minister of education, Dr. Oby Ezekwesili who led hundreds of protesters to attract comments from President Goodluck Jonathan over the abduction of female students of the Government Girls Secondary School, Chibok in Borno state on April 14 by members of Boko Haram. The protesters staged the march to the Presidential Villa under the canopy of #BringBackOurGirls
It was learnt that as early as 6.00am, heavy detachment of  anti riot security operatives had taken position at strategic places around the Presidential Villa.
It was learnt that when the protesters arrived, they were not allowed to go beyond the Federal Ministry of Justice, which is more than 1,000 metres away from Aso Villa. The protesters were stopped in front of Eagle Square by a long chain of police personnel who sealed off the road.
The protesters decided to sit on the ground and refused to be addressed by Secretary to the Government of the Federation, Senator Anyim Pius Anyim.
A protest letter addressed to President Jonathan was later read by Mrs. Maryam Uwais, while the protesters were addressed on behalf of the President by the Minister of State for the Federal Capital Territory (FCT), Mrs. Olajumoke Akinjide.
The protesters had set out from Unity Fountain and marched through the major high ways around the capital city to the point where they were stopped from moving further to the Aso Villa to see President Jonathan for the purpose of directly hear from him on efforts being made to the rescue the abducted female students.
The rally was attended by the biggest crowd witnessed since the protests started on April 30.