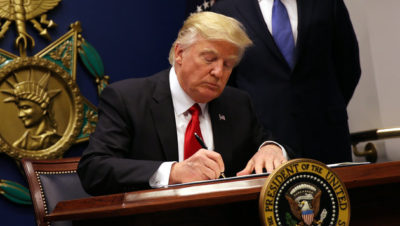 Of course, the new American President, Donald Trump, rode to power on his much touted America Will Be Great Again mantra. His idea was that true Americans would be made to be superior to others across the world; that America would be made the super power of the world again.

And whether or not he was truly elected by majority of Americans is no longer the issue. What is the issue is the way he has been carrying on as if the only thing he has come to do is to brainwash his fellow Americans that they are truly great. And that the only challenge America has had all the while has been the Muslims from certain parts of the world who must be extricated and banished from the great American land.

Since coming to power, Trump has been so much in a haste to implement his anti-Muslim agenda that he trampled on the principles of democracy for which America is reputed. He had given executive orders, barring Muslims from seven independent countries from America, forgetting that in those countries there are Americans who can also be ordered to leave.

President Trump, ruling America obviously from the prism of Chief Executive Officer (CEO) of conglomerates and with some kind of fury and impunity, is leading American down the socio-economic and even political abyss. As a matter of fact, the President has since presented a clear picture of a man who has been used to giving orders to his workers and subordinates without as much as a whimper.

This is a man who has ran successful business conglomerates, controlling men and women of power, timber and caliber; a man who had never had any experience about consultation, lobby and taking advice from anybody; the man whom Americans have elected to now be practicing what is completely strange to him – democracy.

Of course, everyone knows that in a conventional situation, a new President starts his tenure by looking into the economic status of his country; by examining the political rating of his country, by addressing some ambiguities in the domestic and foreign policies with a view to positioning the country to derive great benefits from what the new world, with all the technologies, can offer.

And President Trump was expected to have packaged an economic agenda to address the growing unemployment, which, in deed, his immediate predecessor, ex President Barak Obama tried to resolve. He should have designed policies that would address even the growing terrorism across the globe, so that at the end, the world would be free of mindless killings in whatever name.

But, he came in smocking with anger with the only agendum or the strongest of all his agenda designed to attack Muslims and Islam. He has presented himself simply as another form of terrorist leader, for, while the ISIS terrorist groups have been on it for a long time, Trump is just coming in.

Indeed, immediately he was sworn in as President, his foot soldiers went wild in some parts of America, burning Mosques and threatening Muslims. This was long before he started his pronouncement barring Muslims from Syria, Iran, Sudan and other Islamic nations. Beyond his open pronouncements which can be summed up as religious hate-speeches, his body language has been sending signals to the effect that war against Muslims and Islam is in the air.

In the war he is declaring, Trump should be taught about the diplomatic language which talks about retaliatory actions. And Trump should be told that his warped idea about the world under the feet of America had since evaporated, and in its stead is the world where even the smallest country cannot be willingly challenged without repercussion. And that he cannot use petrol to quench the raging fire of terrorism across the world. That he can only do that at his peril and a great cost to the Americans who he is claiming to be protecting.

And above all, that if he and his likes look critically, they would see clearly that terrorism is not the exclusive preserve of Muslims. That Muslims too die daily as a result of the activities of terrorists. [myad]