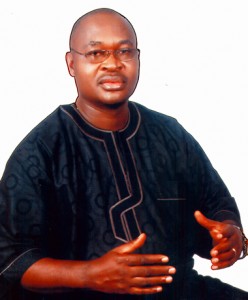 Editor-In-Chief and owner of a weekly newspaper, NEWSDAY, Chief Edet Isong, has confessed that his paper published a fabricated story against the minister of the Federal Capital Territory (FCT), Senator Bala Mohammed.
In a letter to the minister, the publisher apologized to the Minister and his children over the story which the newspaper reproduced from an online medium called pointblanknews.com.
The report had claimed that two children of the Minister had stashed away N35 billion in Unity Bank and UBA as well as an offshore account.
In the letter of retraction and apology signed by Chief Isong, the management of the newspaper said it regretted the embarrassment the false story caused the minister and his children.
The letter dated June 19, 2014 reads:“On behalf of the Management of Newsday Newspapers Limited, I write in respect of our publication of May 5 – Sunday – May 11, 2014 on alleged stashing of N350 billion in Nigerian and foreign accounts by children of the FCT Minister.
“We wish to state that we have since discovered that the story which was lifted from an online medium pointblanknews.com was not true and had caused you (the Hon. Minister) embarrassment. We regret the indiscretion and sincerely apologize for our errors.
“Sir, we wish to inform you that NEWSDAY NEWSPAPER did not publish the said story with an intention of embarrassing the Hon. Minister or disparaging his good name or the image of his family. We have no reason to do so. We will continue to hold you in very high esteem in view of your laudable strides in the transformation of the FCT under your Administration. We shall equally continue to support and highlight your legacies.
“Please kindly accept sincere apologies and forgive us.”
The editor said that his reporters lifted the false story from the online medium believing that it was a factual report only to discover later that the report was totally fabricated.