Home FEATURES Saraki Takes A Shot At AGF From His Seat, Says He Must... 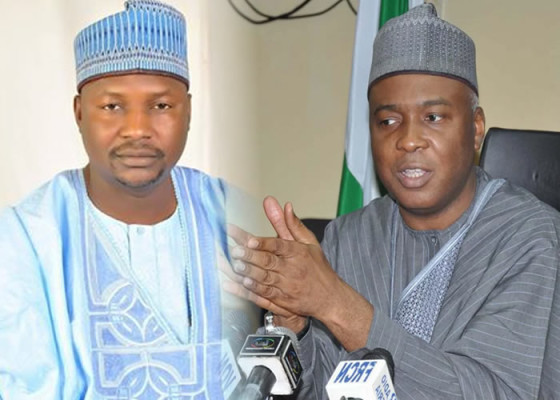 Embattled Senate President, Dr. Bukola Saraki has joined his colleagues in the red chamber of the National Assembly to insist that the Attorney-General of the Federation and Minister of Justice, Abubakar Malami, should appear before the senate committee in respect of the allegations of forgery of the 2015 Senate Standing Rules preferred against Saraki and his deputy, Senator Ike Ekweremadu.

Saraki, who spoke after the Senate Committee Report on Judiciary, Human Rights and Legal Matters was presented by Senator David Umaru(APC), Niger North Senatorial District, wondered if the Chief Law Officer of the Federation could undermine the Senate as to shun in citronella.

“The Constitution is very clear on the issue of Powers of the Senate in dealing with Public Officers and I cannot fathom the Chief Law Officer who should know to turn down Senate invitation. He should be given time within one week to appear and if he refuses again, the Senate will sanction him accordingly,” Saraki maintained.

Earlier while moving the motion through Order 43 of 2015 Standing Rules, David Umaru submitted that the Attorney-General of the Federation, Abubakar Malami had turned down the invitation on two consecutive times.

“Mr. President, Distinguished Colleagues, I want oblige the Senate to consider the Report of the Committee on Judiciary, Human Rights and Legal Matters on the imminent threat to Nigerian Democracy.”

Senator Umaru explained that on the 21st June, 2016, the Chamber resolved that the AGF be mandated to explain the cause behind his decision to prosecute Saraki and 3 others for Senate Standing Rules, which made the Committee to invite him on 23rd June, 2016, but he wrote asking for extension, but did not honour the meeting of 30th July, 2016, a situation he said, was undermining Nigeria democracy.

He said that the AGF sent an Aide, Mr. Obono Oba, who he said was walked out even as he said that Senior Special Assistant (Senate), Ita Enang while reaching out to the Committee on the issue, had apologized on behalf of the AGF.

The AGF had failed to honour the invitation extended to him by the senate committee to explain the rationale behind the prosecution of Principal Officers of the senate at the FCT High Court, over alleged forgery.

Senator Saraki warned that the Senate would the AGF will be sanctioned in line with the Constitution of the Federal Republic of Nigeria, 1999 as amended, if he refuses Committee’s invitation yet again.

He urged the Committee to quickly invite him and revert within one week. [myad]