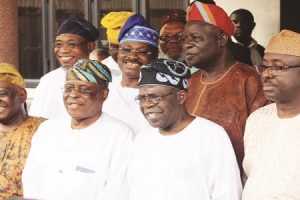 Leaders of the All Progressives Congress (APC) in the South West, including Chief Bisi Akande, Asiwaju Bola Ahmed Tinubu, Aremo Olusegun Osoba, Otunba Niyi Adebayo and Chief Pius Akinyelure have risen to save the party from embarrassing arising from the botched primary election in Ekiti last week Saturday.

The leaders, who held a crucial meeting in Abuja today, Wednesday, with all the 33 governorship aspirants that participated in the primary resolved to appeal to all the delegates in Ekiti State to ensure full and active participation at the primary election scheduled for Friday, May 11.

They encouraged delegates to vote according to their conscience and ensure that the process is not monetized in the overall interest of the party, the growth of democracy and consistent with the progressive tradition which the people of the State are noted for.

They also appealed to the aspirants to shun all manners of sharp practices and avoid any resort to violence during the rescheduled primaries.

“Among other issues, the question of how to conduct a free, credible and transparent primary election was discussed at the meeting.  All the Aspirants were agreeable to the intervention and admonition of the leaders that they maintain the peace throughout the process. The Aspirants encouraged the leaders to further discuss with the National Chairman of the party, His Excellency, Chief John Odigie Oyegun, on the way forward.

“Specifically, the leaders were mandated to discuss with the National Chairman of the party on the possibility of an option of Direct Primaries for the conduct of the rescheduled primaries, as provided for in Article 20 of our party’s constitution to enable every card-carrying member of the party vote for an aspirant of his or her choice.

“As opposed to the Delegates System, the Aspirants believe Direct Primary election is more transparent, less monetised and energises the democratic system through the participation and involvement of the generality of the party members.

“After a subsequent meeting of the leaders with the National Chairman of the party, with the Ekiti State Chairman of the party, Chief Jide Awe, and two representatives of the Aspirants, Engr. Segun Oni and Hon. Opeyemi Bamidele, in attendance, it was decided that given the extent of planning and logistics involved and the closeness of the deadline for the conduct of primaries by all political parties in Ekiti State as well as submission of names of candidates to the Independent National Electoral Commission (INEC), it would be better to go by the decision of the National Working Committee (NWC) of the party to conduct a fresh Indirect Primary Election in Ekiti State on Friday, 11th May, 2018, the leaders having been assured by both the National Chairman of the party as well as His Excellency, Governor Tanko Al-Makura that the rejuvenated Primary Election Committee would put new and extra measures in place to ensure a restoration of the integrity of the electoral process aimed at producing a credible Candidate with the highest number of votes.

In view of this, the entire leadership of the party from the South West geo-political region hereby Thank you.” [myad]