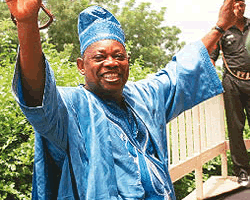 More than twenty three years after the annulment of the June 12, 1993 presidential election, believed to have been won by the late business mogul and candidate of the defunct Social Democratic Party (SDP), Chief M.K.O. Abiola, National Chairman of the party at the time, Chief Tony Anenih, has opened up on how the bid by the political class to reclaim the now infamous June 12 mandate was thwarted by the late Head of State, General Sani Abacha.

In his autobiography, titled: “My Life and Nigerian Politics” billed for public presentation at the International Conference Centre in Abuja on Saturday, Anenih’s narrative, delivered in lucid prose, captures the various political events and developments that culminated in how Abiola won the presidential election, how the outcome of the election was annulled midway by the military government of General Ibrahim Babangida and how the Interim National Government (ING), set up with Chief Ernest Shonekan as head to conduct another presidential election, was overthrown by Abacha.

The book, which chronicles the life and times of the author, most especially the political odysseys that have defined his persona, will, according to the Planning Committee of the event, be presented to the public by former Minister of Defence and foremost philanthropist, Lt. Gen. Theophilus Yakubu Danjuma on a low-key occasion that will be chaired by former Head of State, General Abdulsalami Alhaji Abubakar.

The Planning Committee said that the book presentation would be preceded by a thanksgiving service at Our Lady Queen of Nigeria Pro Cathedral Catholic Church, Garki, Area 3, in Abuja under the superintendence of John Cardinal Onayekan.

The committee said that the book would be on sale after the unveiling by General Danjuma and urged members of the public and the political class to grab copies in order to update themselves on the story of political intrigues at the highest level as told by one of the unique players. [myad]