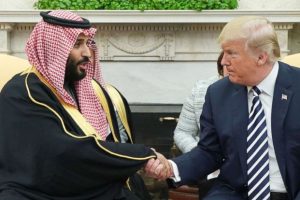 The United State of America has decided to remain neutral for now and preferred not to take sides between Saudi Arabia and Canada after the Middle Eastern nation’s extraordinary reaction to Canada’s condemnation of the arrest of a Saudi Arabian human rights activist.

Saudi officials reacted with fury to the criticism: expelling Canada’s ambassador and withdrawing their own ambassador from Canada, suspending flights from Saudi Arabia to Canada, halting all new Saudi business and investments in Canada, and issuing what to many Canadians appeared to be a veiled threat of terrorist violence.

To critics, the diplomatic dispute over freedom of speech and human rights has underscored how the U.S. at times stays quiet on human rights issues in certain friendly countries.

State Department spokesperson, Heather Nauert said Tuesday that the U.S. raises such issues privately with Saudi Arabia — and that it is up to the Saudis and Canadians to work this out, but she declined to condemn the activist’s arrest.

The activist is Samar Badawi, a noted women’s rights advocate who was honored as an International Women of Courage Award Winner by the U.S. State Department in 2012.

She was arrested last week after years of punishment by Saudi authorities, including a 2014 travel ban and a 2016 arrest.

But she’s also one of as many as a dozen women arrested in recent months, even as the kingdom’s young Crown Prince Mohammad bin Salman has tried to improve the country’s image and taken steps to grant women more freedoms — including drivers’ licenses.

After pushing to grant women that right — Saudi Arabia was the last country on the globe to do so — MBS, as he is known, appears be punishing the very women who led the charge for it.

Badawi is also the sister of famed blogger Raif Badawi, who has been jailed since 2012 for his writings that were critical of the government and sentenced to 10 years and 1,000 lashes. Raif’s wife Ensaf Haidar and their three children moved to Canada and became Canadian citizens earlier this year.

With that connection, Canadian Foreign Affairs Minister Chrystia Freeland took to Twitter to express her alarm and call for both Samar and Raif Badawi’s release.

The Saudi Foreign Ministry called the criticism “a major, unacceptable affront,” “a violation of the Kingdom’s sovereignty,” and “a blatant interference in the Kingdom’s domestic affairs, against basic international norms and all international protocols,” according to the state-run Saudi Press Agency.

The Foreign Ministry also withdrew the Saudi ambassador to Canada and declared the Canadian ambassador to Saudi Arabia “persona non grata,” expelling him.

“The Kingdom will put on hold all new business and investment transactions with Canada while retaining its right to take further action,” the Saudi Press Agency added as well.

Saudi Airlines reportedly suspended flights to Canada, and some 12,000 Saudi citizens studying at Canadian universities were being moved to “programs in other countries with similar education systems, such as the United Kingdom,” according to the Canadian newspaper the Globe and Mail.

But the harsh response didn’t end there. A Saudi government-linked account tweeted an image of a plane flying toward the Toronto skyline, with the warning, “He who interferes with what doesn’t concern him finds what doesn’t please him.” [myad]