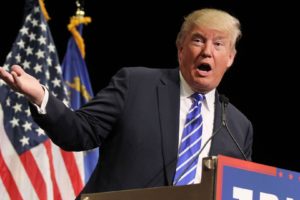 The US President-elect, Donald Trump, has made it clear that the first thing he would do when he mounts leadership in January is to deport three million undocumented immigrants.

Speaking to CBS News in his first TV interview since his election victory, Trump confirmed that he still plans to build a wall along the US border with Mexico.

He said that some parts might end up as more of a “fence.”

Asked how many people he planned to deport, he said: “what we are going to do is get the people that are criminal and have criminal records, gang members, drug dealers.

”Probably two million, it could be even three million, we are getting them out of our country or we are going to incarcerate,” Trump said.

“But we’re getting them out of our country, they’re here illegally. After the border is secure and after everything gets normalized, we’re going to make a determination on the people that they’re talking about who are terrific people. It’s very important we secure our border.’

Asked if he would accept a fence along the border instead of a wall, he said: “For certain areas I would, but certain areas, a wall is more appropriate. I’m very good at this, it’s called construction.”

There are an estimated 10.9 million undocumented immigrants in the United States, many of whom have spent most of their lives in America. [myad]