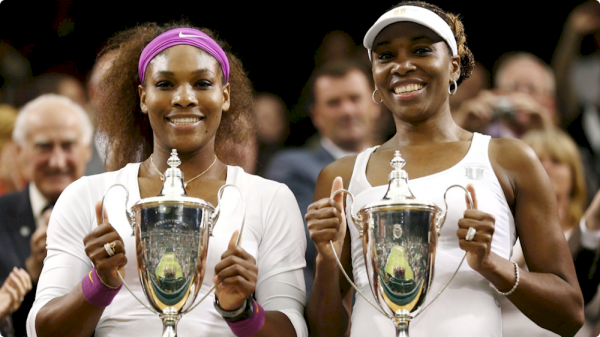 Serena and Venus Williams have won their sixth Wimbledon doubles championship and 14th Grand Slam title as a pair. They defeated fifth-seeded Timea Babos of Hungary and Yaroslava Shvedova of Kazakhstan 6-3, 6-4.
Serena heads home from the All England Club with two trophies: The doubles final started a little more than three hours after she beat Angelique Kerber for the singles championship on Saturday.
The Williams sisters also won the doubles title at Wimbledon in 2000, 2002, 2008, 2009 and 2012, and each time, one of them also won the singles championship.
They are now 14-0 in major doubles finals.
The top-seeded pair of Nicolas Mahut and Pierre-Hugues Herbert also won the Wimbledon men’s doubles championship by beating Julien Benneteau and Edouard Roger-Vasselin 6-4, 7-6 (1), 6-3.
It was the first all-French Grand Slam men’s doubles final in the Open era, which dates to 1968.
For Mahut and Herbert, this is their second major title together.
They won the US Open last year. [myad]