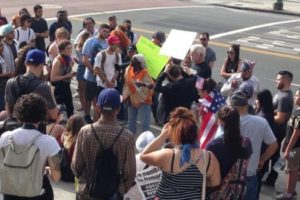 No fewer than 6,000 protesters took to the streets in Los Angeles yesterday, Saturday against the election of Donald Trump as president of the United States in the November 8 polls.
The protest marked the fifth day of demonstrations in cities nationwide against Trump’s Presidency. Trump, a Republican nominee beat what book makers have described as conventional political wisdom by defeating Democrat nominee, Hillary Clinton in the election.

One of the demonstrators called on Americans to sign a petition on Moveon.org to abolish the Electoral College, saying: “Trump didn’t win the popular vote. I don’t understand why we aren’t pushing that harder.”

Passing a megaphone among them, some demonstrators talked about the importance of finding a direction forward while others said that they wanted a female President, and still others admitted to feeling as if they had let Hillary Clinton down.
One woman, who said she was transgender, warned listeners against getting violent, saying: “if we get violent, we get stopped.”
Trump’s attacks on people who are in America illegally and his comments about women, among other things, brought many of the protesters to the streets.
Hours after Saturday morning’s anti-Donald Trump protest, some of those who took part in it gathered on the steps of City Hall to share their thoughts on the election.
Source: Los Angeles Times. [myad]