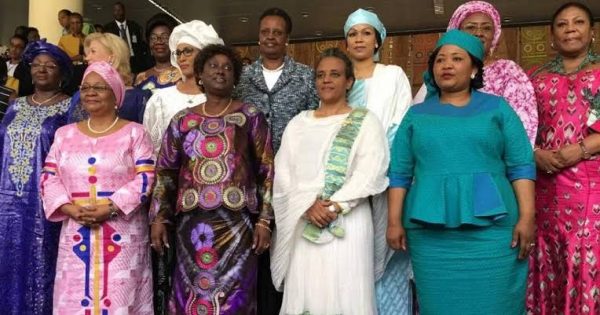 African First ladies have launched a campaign tagged: “Hands off our girls” on the margines of the just concluded 74th Session of the United Nations General Assembly in New York, the United States of America.

The First Ladies, who held their meeting at the Roosevelt Hotel, New York, came up with a communiqué to advance campaign on the reduction of early marriage and rape in Africa

Most of the issued canvassed by the First Ladies, as they contained in the communiqué bordered on the rights of women and girls to be equal partners in development, as well as being afforded opportunity to be seen and heard and the right to economic empowerment, universal health care and the right to justice.

“We want the right to live freely from all forms of gender-based violence including early marriage and rape, we stand together to say Hands off our girls.”

It would be remembered that last year, First Lady of Nigeria, Dr. Mrs. Buhari launched the “Leave our daughters alone” campaign on the aftermath of frequent abductions, rape and violence against women. The event, which held at the National Center for Women Development, Abuja, reverberated around the country and led to a national workshop on gender-based violence.

She was represented at the New York event by Dr. Hajo Sani, Senior Special Assistant to the President as well as other officials.

Those who spoke at the event which was convened by the First Lady of Sierra Leone, Mrs. Fatima Maada Bio, included Prof. Akinwumi Adesina of African Development Bank, Dr. Tedros Ghebreyesus of World Health Organization, Dereje Wordofa of UN Population Fund and Julius Maada Bio, the President of Sierra Leone.