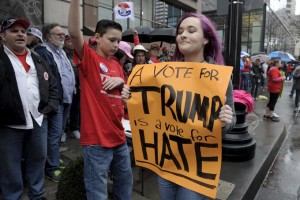 Protest against the election of Donald Trump as President of the United States of America continued today, Saturday, leading to a man being injured by gunfire at Oregon.

Portland police said in a statement that the suspect was crossing Portland’s Morrison bridge in his car and got into an altercation with one of the protesters, shooting the victim several times.

Police said that the shooter subsequently fled the area in his car, while the injured man was brought to hospital for treatment of non-life threatening gunshot wounds.

In the western city, thousands of protesters have gathered each day since Trump’s election win.

On Friday, the protest turned into a riot as demonstrators torched cars and smashed windows.