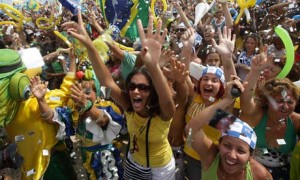 There has been an unease in Sao Paulo and indeed some Brazilian cities since the national team lost by1-7 to Germany in the semi final of the ongoing World Cup tournament which it is hosting.

Reports say that most of the citizens were seen openly wailing even as at today, while the Germans are being careful not to celebrate the victory.

While some Brazil-based Nigerians hinted that the fans merely suppressed the anger in order not to be seen as bad hosts, yet a few believe the fans could still stage protests.

It was gathered that there were isolated cases of burning of buses in anger in certain parts of the cities, which were reported by just a few television stations.

It was reported that many of those who had stockpiled firecrackers for celebrations after the match failed to set them off while a few die-hards, apparently to give vent to welled-up anger, set off a few shots.

The streets were quiet, as noise of pin drops could be heard far off, unlike when the team scraped through till their eventual elimination.

The yellow and blue jerseys – the national colours of Brazil which were donned by fans — soon petered out.

Some, in an apparent pretence to cover up against cold, used their pullovers, sweaters and jackets to cover the jersies. [myad]