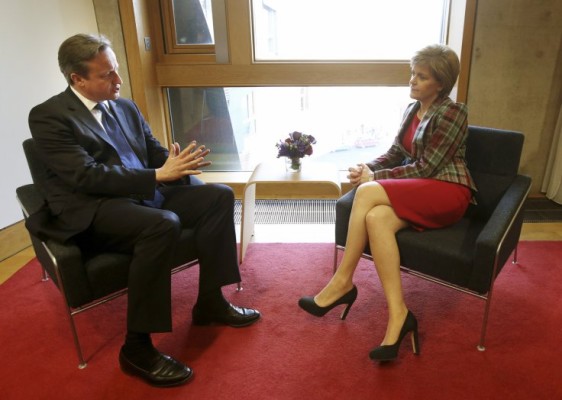 The meeting came a week after the last week’s general election, in which the Conservatives won an unexpected majority across the UK. The party was left with only one MP in Scotland however, with Ms Sturgeon’s SNP party taking all but three of the country’s 59 constituencies.

Prime Minister Cameron promised to review his party’s plans to give Holyrood powers over welfare and ensure they were in line with the Smith Commission’s findings. The Commission is a cross party review set up by the Prime Minister in the wake of the close independence referendum result. It published its recommendations in November.

Holyrood’s Devolution Committee said yesterday that the current plans to transfer more power north failed to meet both “the spirit or the substance” of the Smith Agreement.

Cameron said his government would “make sure it really is Smith” adding: “We’re going to look again at welfare and make sure the clauses reflect what that agreement was.”

“The First Minister wants to send some proposals for me to look at and I’m happy to examine proposals, there’s going to be a debate, of course there will be a debate.

“I don’t rule out making other changes if sensible suggestions are made.”

While Cameron appears open to considering further powers for Scotland, he said he did not believe a second independence referendum was “remotely on the cards”.

He spoke out after a senior source within the SNP was reported to have said it would be prepared to push ahead with plans for such a vote without the permission of the Prime Minister if necessary.

But the Conservative leader said: “I don’t think this is remotely on the cards, I tend to take at face value what Alex Salmond says on the record, rather than off the record.

“On the record, he said that this was a once-in-a-generation, potentially a once-in-a-lifetime, opportunity and I’m sticking with that.”

He spoke to journalists after having talks with Ms Sturgeon at her official residence of Bute House in Edinburgh.

Ms Sturgeon said the meeting was constructive and businesslike, adding: “Two things of significance were agreed at the meeting,” she said.

“Firstly, there was a commitment from the Prime Minister that the legislation that they will shortly introduce to the Westminster parliament to implement the proposals of the Smith Commission will implement those proposals in full.

“We had a report of a Scottish Parliament committee yesterday which said that where they have got to thus far doesn’t fully implement the Smith Commission proposals.

“So, there is a commitment to do that, and we will make sure that happens.

“Secondly, I have said we will put forward proposals for devolution further than the Smith Commission proposals.

“The Prime Minister has said they would consider those proposals.

“I am not going to put words in his mouth and say he has agreed any specific proposals, but there is an agreement to look at that and there will be a meeting with Deputy First Minister and the Secretary of State for Scotland to take that discussion forward.

“I want Scotland to have full fiscal autonomy, David Cameron doesn’t, but what we said in our manifesto was that there were priority powers over and above the Smith Commission that we wanted to see devolved.

“So, what we are talking about are business taxes and employment legislation, the minimum wage and more powers over welfare.”

Ms Sturgeon said she still advocates full fiscal autonomy despite the oil price crash which would leave Scotland with a large deficit.

“I recognise that even if there was an agreement to move to full fiscal autonomy, which there is not, that would take time to do,” she said.

“As a priority, I want to get our hands on the levers that really matter as quickly as possible.”

Deputy First Minister, John Swinney, who was also at the meeting, said today that the Scottish National Party will consider putting plans for another independence referendum in its election manifesto for Holyrood next year.

Ms Sturgeon said: “I said to him on the phone last Friday and I have said it to him again today, he has a choice to make about how he responds to how Scotland voted last week.

“He can act as if it is business as usual and nothing has changed, and people will draw their own conclusions from that.

“They will think that Westminster isn’t capable of listening or responding.

“Or he can prove that Westminster does listen, it does respond, it can deliver a better deal for Scotland.”

Cameron said he had had a “very positive meeting” with the SNP leader.

“I’ve always said I believe in the respect agenda, and I think coming to Scotland just over a week after the election result is the right thing to do,” he stated.

He confirmed he would meet his election pledge to include a bill on more powers for Holyrood in his first Queen’s Speech.

The Conservative leader said: “I made a commitment before the election, if I was the Prime Minister I would implement the Smith Commission report in full by introducing a Scotland Bill in the first Queen’s Speech and I can confirm that is exactly what I will do.

“It was an agreement made in Scotland for Scotland by the Scottish parties and I’ll make sure we implement every aspect of it.

“That will build a Scottish Parliament that doesn’t just look after the vital issues of health and education and those devolved matters, but it will give real power over taxation and spending, so if Scotland wants to take different decisions about how much money to spend, what taxes to raise, it will be able to do so, and I think that’s the right future for Scotland.”

The Scottish Parliament is already due to get some power over income tax in April 2016, as a result of changes to the devolution settlement made by the Tory-Liberal Democrat coalition government.

But the Smith Commission called for far greater powers over income tax to be handed over, along with some control over benefits and welfare north of the border.

Cameron stressed however that he did not support SNP demands for full fiscal autonomy, which would make the Scottish Parliament responsible for raising all the money it spends.

He said: “I don’t support full fiscal autonomy. I put it like this – Scotland has voted to stay part of the United Kingdom and I’m delighted about that. I think there are two potential futures, the future I would offer and I think many others would offer is a much stronger Scottish Parliament with these tax and spending powers and with the extra powers Smith talks about, but also with the solidarity of the United Kingdom.

“I want people in Scotland to know that the whole of the United Kingdom stands behind your pensions, stands behind unemployment benefit, will stand behind Scotland if it has a difficult year, if the oil price goes down.

“That’s what I believe in, the solidarity union as well as the United Kingdom that’s about defence and foreign affairs and all the institutions we have built together.

He continued: “I believe in the solidarity that’s at the heart of our United Kingdom.

“So it’s an honest disagreement between the First Minister and me about this, but we will deliver the stronger Scottish Parliament, be in no doubt about it.”

Cameron also said his Tory majority government had a mandate to press ahead with plans to withdraw from the Human Rights Act and to hold a referendum on Britain’s membership of the European Union.

Both these could put his Westminster government on a collision course with the SNP administration at Holyrood.

Ms Sturgeon has said repealing the Human Rights Act is an “appalling thing to be doing” and has argued that Scotland should not be taken out of the EU against its wishes, even if a majority across the UK supports such a move.

On the issue of a European referendum Cameron said: “We put forward in a manifesto the clearest possible pledge of a renegotiation and an in/out referendum by the end of 2017.

“That manifesto has now been backed at a UK wide general election so I believe I have a mandate for that, rather in the same way that the SNP felt they had a mandate for their referendum.

“They didn’t give Orkney and Shetland an opt out, or the Borders an opt out, so this is a UK pledge, it will be delivered for the UK and it will be debated and discussed in Parliament after we publish the Queens Speech.”

He also insisted the Tories had made a “very clear manifesto promise” to scrap the Human Rights Act and establish a British Bill of Rights in its place and now had a “mandate for that promise”.

Cameron said: “Some people interpret this promise as being against human rights. It isn’t, it’s to have a British Bill of Rights written into UK law so these things can be adjudicated in British courts.”

He conceded there would have to be talks between Westminster and the Scottish and Welsh assemblies about how this would work, and stated: “There are some great complexities here but I’m sure it’s not beyond the wit of clever people to make this work.” [myad]