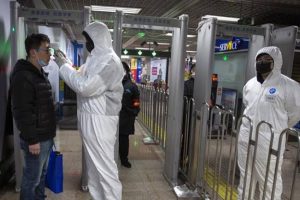 Two people in England have been diagnosed with the Wuhan coronavirus and are being treated in Newcastle.

The patients are members of the same family and are the first people in England to be diagnosed with it on British soil.

They did not fly back to the UK on the Government’s evacuation flight, which is scheduled to land in Oxfordshire today, January 31.

Until today, at least 161 people had tested negative for the virus in the UK but none had been diagnosed with it.

The infection makes England the 23rd country or territory outside of China to declare cases of the infection. It did, however, confirm that they are not in Wirral, Merseyside, where people being evacuated from the centre of the outbreak will be quarantined later today.

The patients are likely to be at the Royal Victoria Hospital in Newcastle, which is one of only four hospitals in the country equipped to deal with infectious patients like this.