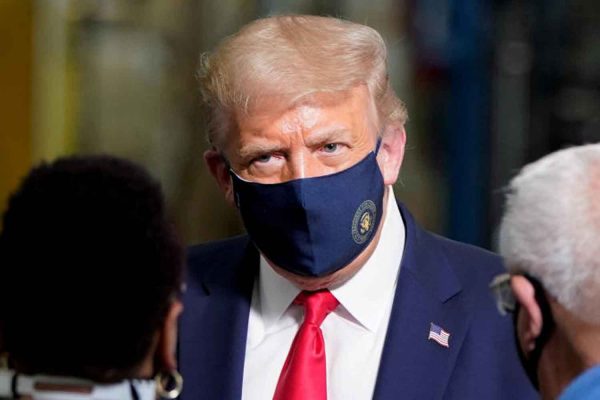 Stricken by coronavirus, a feverish and fatigued President Donald Trump of America has been flown to a military hospital after being injected with an experimental drug combination in treatment at the White House.

The President, who had spent months downplaying the threat of the virus, was forced to cancel all campaign events a month before the election as he fought a virus that has killed more than 205,000 Americans and is hitting others in his orbit as well.

The White House said Trump’s expected stay of “a few days” at Walter Reed National Military Medical Center was precautionary and that he would continue to work from the hospital’s presidential suite, which is equipped to allow him to keep up his official duties.

“Going well, I think! Thank you to all. LOVE!!!,” the president tweeted after having been moved to the military hospital for treatment.

“He has completed his first dose and is resting comfortably,” Conley said.

Earlier in the day, Conley said that the President had also received a dose of an experimental antibody combination by Regeneron that is in clinical trials, adding that Trump “remains fatigued but in good spirits.”

Trump walked out of the White House yesterday, October 2 wearing a mask and gave a thumbs-up to reporters but did not speak before boarding Marine One. Members of the aircrew, Secret Service agents and White House staff wore face coverings to protect themselves from the president on board the helicopter.

In a videotaped before leaving for Walter Reed, Trump said: “I think I’m doing very well, but we’re going to make sure that things work out.”

Just a month before the Presidential election, Trump’s revelation that he was positive for the virus came by tweet about 1 a.m. Friday after he had returned from a Thursday afternoon political fundraiser. He had gone ahead to the event, saying nothing to the crowd though knowing he had been exposed to an aide with the disease that has infected millions in America and killed more than a million worldwide.

First lady, Melania Trump also tested positive, the president said, and several others in the White House have, too, prompting concern that the White House or even Trump himself might have spread the virus further. He said in his video that his wife was doing very well.