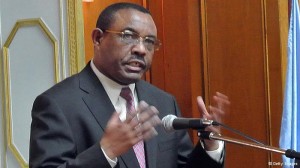 The Ethiopian Prime Minister has been named to head a committee, set up by African leaders, to draw up a plan of action on how to wipe out terrorism from the face of Africa. The plan of action is expected to be tabled before the next African Union meeting between June 25 and June 26 in Malabo, Equitorial Guinea.
The committee is made up of ministers from selected countries and is aimed at forging a continental resistance against the spread of terrorism across Africa.
The committee emanated from the meeting of Heads of government in Africa which was concluded in Pretoria, South Africa yesterday.
The meeting was attended by the leaders of South Africa, Ethiopia, Ghana, Congo, Kenya, Uganda, and Cote D’Iv oire as well as President Goodluck Jonathan of Nigeria
Breifing news men today on the outcome of the meeting, the Presidential spokesman, Dr. Reuben Abati said the leaders discussed  modalities  for defining a stronger framework for cooperation and partnership amongst African states to deal with terrorism.
According to Abati, the African leaders  recognized the fact that no one country can on its own deal with the challenges of terrorism in Africa.
“That what is required is not just a country-based approach or a regional approach but a continental approach which requires the cooperation of All African States. The realization, of course, is that when there is a threat of terrorism in one country it runs to another. And it has also been established in the narrative about the threat of terrorism in Africa that indeed there is a continent wide network and that many African states are facing this particular threat.”