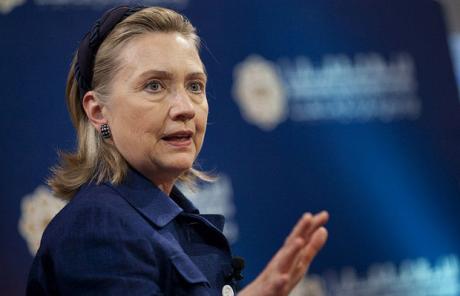 Just over a year after leaving her job as secretary of state, Hillary Clinton has offered views on foreign policy that analysts said seem part of an effort to distance herself from the Obama administration as she prepares a possible 2016 White House run.
In appearances this month, Clinton struck a hawkish tone on issues including Iran and Russia, even while expressing broad support for the work done by Obama and her successor as secretary of state, John Kerry.
Clinton said in New York that she was “personally skeptical” of Iran’s commitment to reaching a comprehensive agreement on its nuclear program.
“I’ve seen their behavior over (the) years,” she said, saying that if the diplomatic track failed, “every other option does remain on the table.”
Just two weeks earlier, Clinton was forced to backtrack after she drew parallels between Russian President Vladimir Putin and Nazi dictator Adolf Hitler at a closed-door fundraiser. In comments leaked to the media by a local reporter who attended the event, Clinton said Putin’s justifications for his actions in the Crimean region were akin to moves Hitler made in the years before World War Two.
“I’m not making a comparison, certainly, but I am recommending that we can perhaps learn from this tactic that has been used before,” she said the next day at an event in Los Angeles.
As secretary of state, Clinton was a key player in a U.S. effort to reset relations with Russia, a policy that critics say now appears to be a glaring failure.
Clinton’s recent rhetoric on Iran and Russia is part of a renewed focus on foreign policy for the former first lady and New York senator, who is widely considered the Democratic presidential front-runner in 2016 if she chooses to run.
She has been giving speeches across the country since leaving the State Department, but Wednesday’s address was her first on-the-record event in recent months focused solely on international relations.
“Secretary Clinton is distancing herself a bit on foreign policy matters from the administration recently,” said John Hudak, a Brookings Institution fellow and expert on presidential campaigns.
“This is a pretty standard practice for anyone looking to succeed the sitting president, even within the same party.
“It’s one of the first steps for her to say, ‘We’re not the same candidate,'” he said.
Clinton’s office did not respond to questions about the issue.
Creating space between her position and Obama’s is a “smart move,” said Hank Sheinkopf, a New York-based Democratic strategist who worked for the 1996 presidential re-election campaign of Hillary Clinton’s husband, Bill Clinton.
“The present administration is in a no-win situation with Russia, with Syria and in the Middle East,” Sheinkopf said before Clinton’s New York speech.
“Making a distance from them can only help.”
During her four-year tenure in the State Department, Clinton helped lead the charge on imposing strong sanctions on Iran, which she mentioned in her New York speech to a pro-Israel audience-including several Democratic lawmakers-at an American Jewish Congress dinner honoring her.
In late January, Clinton sent a letter to Carl Levin, Democratic chairman of the Senate Armed Services Committee, calling herself a “longtime advocate for crippling sanctions against Iran,” but urging that Congress should not impose new sanctions during negotiations over Tehran’s nuclear program.
She said that like Obama, she had no illusions about the ease or likelihood of reaching a permanent deal with Iran following an interim agreement reached under Kerry.
“Yet I have no doubt that this is the time to give our diplomacy the space to work,” a stance she reaffirmed on Wednesday.
Republicans have promised to make Clinton’s State Department record an issue if she runs for the White House, focusing on the 2012 attacks on a U.S. diplomatic outpost in Benghazi, Libya, in which four Americans, including Ambassador Chris Stevens, were killed.
The Republican National Committee has condemned Clinton’s handling of the Benghazi assault, suggesting in a recent research note that “Benghazi is still the defining moment of Clinton’s tenure as Secretary of State.”
Some political analysts see her toughening rhetoric as more than a campaign tactic, and fitting with her foreign policy statements before joining the Obama administration. They said that could broaden her appeal to voters if she chooses to run, a decision she has said will not come until the end of this year.
Clinton, while a senator, voted in 2002 for a resolution authorizing U.S. military action against Iraq, a position that hurt her with liberal primary voters in her losing battle with Obama for the 2008 Democratic presidential nomination.
“Making a credible and forceful case for America’s place in the world – that’s the kind of thing she’s likely to say and continue to say,” said Josh Block, a former Clinton administration official and now an executive at the Israel Project in Washington.
“Those are messages that will resonate with Democrats and independents, as well as some Republicans.”

We Have No Vacancy, Police Announces