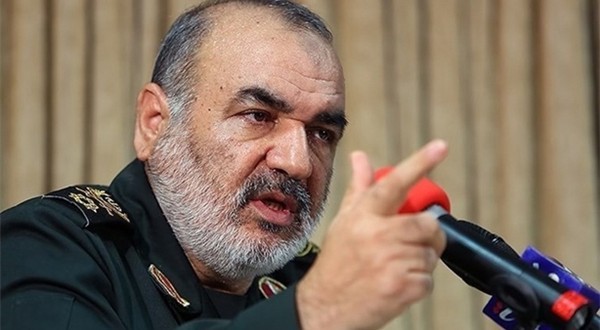 Brigadier General Hossein Salami, the number two official in Iran’s Revolutionary Guards Corps has vowed that Tehran will never allow outsiders to inspect the regime’s military sites under any nuclear agreement, the state media organ, Press Television quoted Brigadier General Salami as making it clear that harsh response would await anyone who raised the subject of inspections.
“Visiting a military base by a foreign inspector would mean the occupation of our land,” Salami said. Even discussing the subject is tantamount to “national humiliation,” he added.

There had been reports in Western media outlets that broached the possibility that Tehran might permit international inspectors to visit its military sites in an effort to determine whether there had been nuclear-related activities there.
But according to Salami, the Iranian regime “will respond with hot lead (bullets) to those who speak of it.”
He declared that Iran “will not become a paradise for spies” and “will not roll out the red carpet for the enemy.”
Iran and six world powers – the United States, Britain, France, Germany, Russia, and China – announced  earlier this month that they had reached a framework deal to curb Iran’s nuclear program in return for lifting sanctions. Participants said they would work to conclude a final agreement by June 30.

A fact sheet on the framework accord issued by the State Department said Iran would be required to grant the U.N.-affiliated International Atomic Energy Agency access to any “suspicious sites,” the Associated Press noted.
But Iran has questioned numerous points in the fact sheet – including Washington’s claim that sanctions against the Islamic Republic would be lifted only after the IAEA verified Tehran’s compliance with commitments it made in the talks.
Iranian leaders, by contrast, have said the deal requires that sanctions be removed immediately, and have accused Washington of lying about its contents.
The U.S. fact sheet said Iran has agreed to implement the Additional Protocol to the Non-Proliferation Treaty, which grants the IAEA expanded access to both declared and undeclared nuclear facilities, including military bases.
But Salami declared that permitting foreign inspectors to visit a military base was unacceptable because it would potentially expose Iranian “military and defense secrets,” the Associated Press reported. [myad]