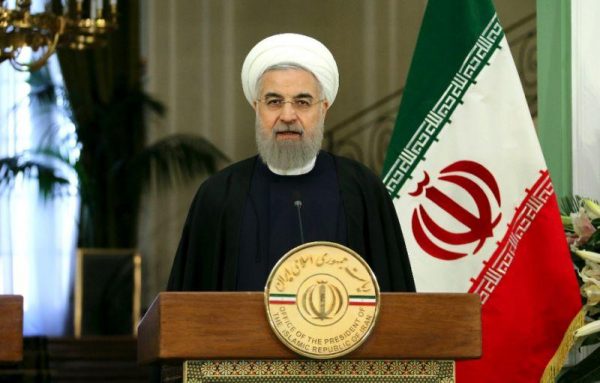 President Hassan Rouhani has turned down the resignation of his foreign minister, Zarif, today, Tuesday, standing by a leading ally in Iran’s moderate faction who has been targeted by hard-liners over a 2015 nuclear deal with the West.
The minister, a US-educated veteran diplomat who helped craft the pact that curbed Iran’s nuclear program in return for sanctions relief gave no reason for his decision to quit when he announced it on Instagram yesterday, Monday.
But his move thrust the schism between Iran’s hard-liners and moderates into the open, effectively challenging Supreme Leader Ayatollah Ali Khamenei to pick a side.
An ally of Zarif said his resignation was motivated by criticism of the nuclear accord, under increasingly intense fire in Iran since the United States abandoned it last year.
“There were closed-door meetings every week, where top officials were bombarding him with questions about the deal and what will happen next and so on,” a Zarif ally told Reuters on condition of anonymity. “He and his boss (Rouhani) were under a huge amount of pressure.”
Since the United States walked out of the nuclear deal and reimposed sanctions last year, Rouhani has had to explain why Iran has continued to abide by its restrictions while reaping virtually none of the foreseen economic benefits.
Despite announcing his resignation, Zarif had not officially tendered it to Rouhani by Tuesday afternoon and the president had not accepted it.
Iran’s Foreign Ministry reiterated that Rouhani had not accepted Zarif’s resignation, rejecting reports in the media.
“All interpretations and analysis around the reasons behind the resignation of Foreign Minister Mohammad Javad Zarif, beyond what he posted on his Instagram account, are not accurate and, as the chief of staff of the president of Iran said today, the resignation has not been accepted,” spokesman Bahram Qasemi was quoted as saying by Fars news.
Lawmakers representing the majority moderate faction sent Rouhani a letter asking him to keep Zarif on, IRNA reported.
Rouhani’s chief of staff Mahmoud Vaezi said Rouhani stood by Zarif. The president’s praise was “a clear sign of the satisfaction of the representative of the people of Iran about the wise and effective positions and work of Dr. Zarif,” Vaezi wrote on Instagram.
Lawmaker Ali Motahari, like other politicians from both camps, said Rouhani was unlikely to accept Zarif’s decision since no one else could fill the demanding post.
The schism between hard-liners and moderates over the nuclear deal shows the tension in Iran between the two factions, and between the elected government which runs the country on a day-to-day basis and a clerical establishment with ultimate power.
Rouhani won elections in 2013 and 2017 on reform promises, while Khamenei, in power since 1989, is seen as above factional infighting but sympathetic to hard-liners. While Rouhani chooses ministers, Khamenei traditionally has the last say.
“If he (Khamenei) publicly backs Zarif and Rouhani, this crisis will be over in a good way and it will narrow the gap between different political camps in the country,” said an official close to the hard-line camp.
The political uncertainty comes at a difficult time for Iran’s leaders as the reimposed US sanctions have dashed hopes of an economic breakthrough. Rouhani has warned that the country is facing the worst economic crisis in 40 years.
Hardships have triggered waves of nation-wide protests, with calls for both Rouhani and clerical leaders to step down.
Some unconfirmed Iranian media reports indicated Zarif had resigned because he had not been informed about a visit by Syrian President Bashar Assad on Monday.
Zarif was quoted as condemning “factional fighting” in a newspaper interview published on Tuesday, suggesting political tensions may have played a part in his decision. The Fars news agency reported that the interview had taken place last week, before Zarif’s resignation.
A former pro-reform official warned of dire consequences of Zarif’s resignation is accepted.
“If accepted, it will have a domino effect … and others (ministers) and even Rouhani might follow him and this is not something that the country can tolerate when pressured by America and sanctions,” he said.
“Hard-liners will be strengthened and any kind of reform will be buried for at least 10 years.”