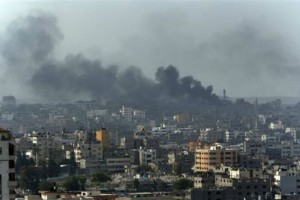 Israel and armed Palestinian groups have declared ceasefire in Gaza in early hours of today, Monday, halting intense violence that claimed 25 Palestinian lives and four civilians in Israel in just over 48 hours.

Reports said however, that any meaningful change to the status quo in Gaza, under Israeli air, land and sea blockade for 12 years, a resumption of the deadly fighting is only a matter of time.

There have been several bouts of fighting across the Gaza-Israel boundary in recent months, each lasting one to three days, with Israel and armed groups coming to a ceasefire agreement.

Those agreements have brought little relief for Gaza’s two million Palestinians, half of them children, who have been plunged into poverty under Israeli siege and whose reality grows increasingly dire.

A human rights group in the territory, Al Mezan, warned today, Monday that international silence regarding Israel’s military operations against Palestinians in Gaza would result in the collapse of the humanitarian situation in the territory.

International bodies like the United Nations have repeatedly warned that an explosion in the Gaza pressure cooker is imminent.

But instead of using its leverage to change the underlying causes, the UN has played a complicit role in Israeli violations of international law by enforcing the siege and treating Palestinian rights as bargaining chips.

The European Union meanwhile has rewarded Israel’s settlements built in violation of international law and funded its weapons industry that “field tests” its wares on Palestinians in Gaza.

Those bodies and governments allied with Israel performatively condemn Palestinian factions for firing rockets as though they are the cause and not a symptom of the wider human rights and political context.