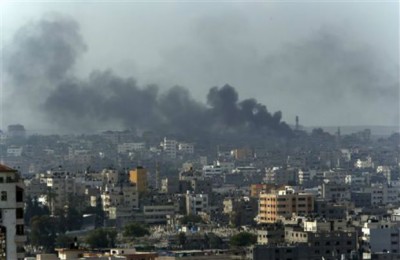 There are indications that Israeli army has began a unilateral tactical withdrawal from the 26-day conflict with Hamas as it asked residents of Beit Lahiya in northern Gaza that it was “safe” for them to return to their homes.

Witnesses admitted today that they actually saw troops withdrawing from the area. This is the first time troops had been seen pulling back since the start of the devastating 26-day Gaza conflict, which has so far claimed more than 1,660 Palestinian lives and forced up to a quarter of the territory’s population into exile.

“Messages have been conveyed to residents of the northern Gaza Strip that they may return to the Beit Lahiya area,” an army statement said, with a spokeswoman indicating the message had been relayed to authorities in the Palestinian enclave.

“They have been informed it is safe for civilians to return to Beit Lahiya and Al-Atatra,” the spokeswoman said, in what was understood to be a confirmation that troops had stopped operating there.

Witnesses in Al-Atatra, which is part of Beit Lahiya, reported seeing troops pulling back, in a move mirrored in the south, where residents said the soldiers had withdrawn from villages east of Khan Yunis, close to the Israeli border.

The announcement came as unconfirmed media reports said Israel would not be sending a delegation to truce talks in Cairo, with some suggesting the pullback could signal the start of a unilateral Israeli withdrawal.

On July 16, the Israeli military dropped flyers and sent text messages warning residents in Beit Lahiya to flee their homes and not return until further notice.

Similar messages were delivered to Zeitun and Shejaiya, to the south and east of Gaza City, respectively.

Other messages were relayed in other areas, prompting hundreds of thousands of people to flee in terror, most of whom have sought refuge in 90 UN schools and other facilities across the Gaza Strip.

UN figures indicate that up to 25 percent of Gaza’s population of 1.8 million have fled their homes, with a quarter of a million of them taking refugee in shelters run by the UN agency for Palestinian refugees (UNRWA). [myad]