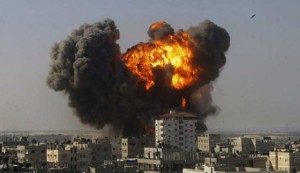 The Israeli air force has launched a series of air raids on the Gaza Strip, hours after the bodies of three settlers were found in the occupied West Bank. The Israeli military said it launched 34 raids in the early hours today, in response to 20 rockets fired into Israel from the strip.
A Palestinian was also shot dead today in an Israeli operation in Jenin, in the West Bank.
The Israeli military said the dead man was a member of Hamas and was attempting to throw a grenade, although this information cannot be independently verified.
The attacks came hours after the Israeli Prime Minister, Benjamin Netanyahu, promised that the Gaza-based group Hamas “will pay” after the discovery of the young settlers’ bodies near the West Bank village of Halhoul on Monday.
They disappeared on June 12 while hitchhiking home from a religious school in Kfar Etzion, an illegal settlement between Bethlehem and Hebron, and were last heard in a brief emergency call to police.
Their disappearance set off the largest military operation in the West Bank since the end of the second Intifada. More than 400 Palestinians were arrested in the 18-day search, thousands of homes raided, and five people killed by Israeli gunfire.
Hamas blamed
On Monday night it demolished the homes of Marwan Qawasmeh and Amer Abu Aisha, two Hebron-area residents who the Israeli government has named as suspects.
The use of punitive demolitions revived a practice that was almost entirely discontinued in 2005.
The Israeli security cabinet also held an emergency meeting on Monday night, which ended with no major decisions on further actions, according to a government source. The cabinet will reconvene on Tuesday.
Some politicians have called for harsher steps against Hamas, including targeted assassinations. “I don’t know how many leaders of Hamas will remain alive after tonight,” said Tzachi Hanegbi, the deputy foreign minister.
The group dismissed the accusations in a statement, calling them propaganda. “We warn Israel against any stupid action. If Israel wants a war, the price they will pay will be greater than in previous wars,” it said.
The PLO’s Hanan Ashrawi told Al Jazeera that the “Israeli escalation already took place, and now they have an excuse of further escalation.”
[myad]