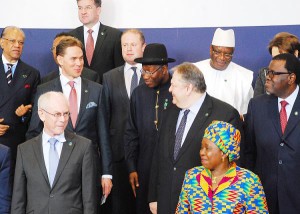 President Goodluck has asked leaders in Africa to collectively look for the sponsors and supporters of terror groups who have been posing serious security challenges to many countries in the continent.
The President is surprised and worried that the weapons of choice of these terror groups are not only the Small Arms and Light Weapons (SALW), but also the rapid propelled grenades and surface-to-air missiles and asked: “where do they get these sophisticated weapons from?”
President Jonathan who addressed the 4th European Union-African Union Summit in Brussels, Belgium today, as the Chairman of the African Union Peace and Security Council, noted that the total value of what these terrorists possess as individuals, in terms of what they wear and where they live cannot buy assault rifles.
“We all have the collective responsibility to un-earth their sponsors and supporters who are determined to destabilize Africa. We should hold them responsible and accountable for their actions.”
President Jonathan said that the summit is taking place against the backdrop of significant Peace and Security challenges facing not only Africa but Europe and the rest of the world as well.
According to him, the linkages of terror groups have made it imperative for African leaders to be more proactive on the issue of Peace and Security. He suggested a holistic and integrated approach, saying that peace and development are two sides of the same coin.
President Jonathan said that Peace and Security Architecture need to be strengthened and the African Standby Force needs to be fully operationalised in the face of the new threats and challenges facing Africa.
“We need to give stronger impetus to capacity–building and logistical support to boost Africa’s capability and preparedness to take pre-emptive steps to contain conflict situations, quell violence and deal with the scourges of terrorism.
“There is need for renewed efforts to address the challenges at hand, in the context of our Partnership. The modest successes recorded in tackling the Peace and Security challenges confronting us notwithstanding, the fact remains that we may continue to fall short of the target of ridding Africa of conflicts if the nexus that exists between peace and development is not fully explored and developed.
“Our approaches must therefore be integrated while simultaneously addressing the socio-political factors that push countries to conflict, with their attendant humanitarian and socio-economic consequences.”
Over ninety delegations from different parts of the world are attending the summit which has as its theme: ‘investing in people, prosperity and peace.’
The summit is focusing on ways to deepen cooperation under the three areas identified in the theme.