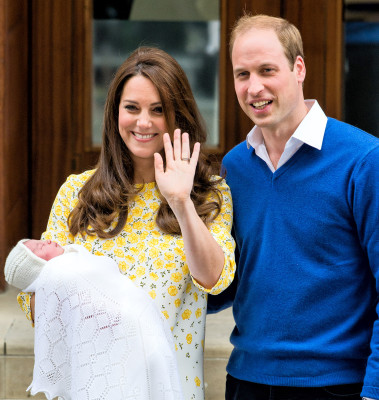 The name of the Princess of Cambridge has finally been revealed to the world as Charlotte Elizabeth Diana. In a touching tribute, the little girl, who was born on Saturday, has been named in honour of her grandfather, her grandmother and her great-grandmother.

Announcing the name in a statement this afternoon after days of speculation, Kensington Palace said: ‘The Duke and Duchess of Cambridge are delighted to announce that they have named their daughter Charlotte Elizabeth Diana.

‘The baby will be known as Her Royal Highness Princess Charlotte of Cambridge.’

A princess called Charlotte — a name that is French in origin — is a nod to her grandfather, the Prince of Wales.

William has spoken of his deep respect for his father and the amount of time the prince commits to his charitable work. ‘I just really hold him in great admiration,’ the Duke has said.

The Prince of Wales strove to protect William and Prince Harry following the death of their mother Diana Princess of Wales and backed them as they have worked to honour her memory through their charitable connections.

They, in turn, accepted and supported him when he married Camilla Parker Bowles, now the Duchess of Cornwall.

WHAT’S IN A NAME?

A princess called Charlotte — a name that is French in origin — is a nod to the little’s girl grandfather, the Prince of Wales.

In royal history, George IV named his only child Charlotte, but she died in childbirth at 21.

George III’s wife was Queen Charlotte, who was born 1744. She used it instead of her given first name, Sophie. The royal was married to George III and founded Kew Gardens,

The name was particularly popular in the 18th and 19th centuries due to Queen Charlotte’s influence in tandem with that of novelist Charlotte Bronte. It rose in popularity in the 1980s, particularly in the UK and Australia.

Surprisingly, popularity of the name Charlotte is expected to fall following the announcement.

‘Parents don’t want to be labelled as having been influenced by others in their baby name choice, particularly by such a high-profile family. New parents who had been thinking of naming their baby Charlotte, may well now be thinking again.’

According to the Office for National Statistics, Charlotte was the 21st most popular name for girls in England and Wales in 2013. It has fallen in popularity over the last decade and was in 4th place in 2000.

The princess’s middle name Elizabeth is in tribute to the Queen, the girl’s great-grandmother.

The Queen is held in great respect by her family and William has spoken of how she has become an even more important part of his life as he has grown older.

Diana is the name of William’s late mother, the Princess of Wales.

William is protective of his father, defending him against criticism he has often faced. Naming his daughter after the prince will be seen as a clear public demonstration of his love of Charles.

Charlotte is also the middle name of Kate’s sister Pippa Middleton. In French, it means ‘petite’ and ‘feminine’ or ‘free man’.

In royal history, George IV named his only child Charlotte, but she died in childbirth at 21. George III’s wife was Queen Charlotte, who was born 1744.

George III’s wife was Queen Charlotte, who was born 1744. She used it instead of her given first name, Sophie. The royal was married to George III and founded Kew Gardens.

Like most royals, the princess has more than one middle name, both of which are likely to have inspired by two women in William’s life whom he greatly admires.

The Duke and Duchess of Cambridge are likely to have chosen Elizabeth in tribute to the baby’s great-grandmother the Queen. It is also Kate’s middle name.

Many thought it likely that William and Kate would use the name Diana, though it has probably been used as one of the baby’s middle names to avoid comparisons with her late grandmother.

The Duke places great importance on honouring her memory, having already used Diana’s sapphire and diamond engagement ring when he proposed to Kate.

The Duke and Duchess of Cambridge reportedly decided on a name for their daughter shortly after the birth but wanted to inform the Queen personally before it was publicly released.

There is no protocol which says the monarch needs to be consulted about the name of a newborn in the family, and senior royal sources stressed she has no expectation of being informed in person before the princess’s name is made public.

However, William, who has grown especially close to his grandmother in recent years, apparently decided to afford her the honour when they met in Sandringham.

Today, the newborn was reportedly set to meet her great-grandmother, the Queen, when the family left Kensington Palace to embark on a new life in Norfolk, where the monarch is in residence.

They had introduced the little girl – the most senior royal princess to be born for 65 years – to her brother George and to their families yesterday.

The newborn may herald a new generation in the monarchy, but it is customary for royals to look to their past for name ideas. The repetition of names in each generation is at least partly an effort to preserve the continuity of one of the world’s oldest institutions.

For weeks, bookmakers had been saying that Alice was the clear favorite. But in recent days Charlotte, the feminine form of Charles, has also swayed at the number one spot.

When the baby’s older brother, Prince George, was born in 2013, the royal couple took two days to reveal his name, waiting until after Queen Elizabeth II had met her new great-grandson.

The wait over her name has led to a betting bonanza in the past 48 hours, and Charlotte and Alice had been picked at the clear favourites. But outsiders such as Olivia also attracted a sudden flurry of wagers.

A spokesman for Ladbrokes said the betting markets had been in ‘total mayhem’ with 20,000 individual wagers – some of which were six-figure sums – placed on the bet in the past two days. That equates to more bets than were put on the General Election.

Bookmakers had been ‘praying’ that the Duke and Duchess of Cornwall opt for a name outside of the top seven – which also included Diana, Alexandra, Victoria and Elizabeth – to stop them having to pay out millions in winnings. [myad]