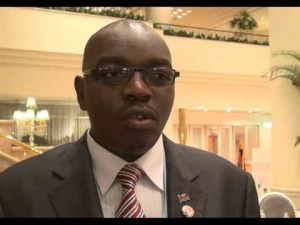 A Malawian minister, Godfrey Kamanya has shot himself dead early today, supposedly after losing his parliamentary seat in Tuesday’s general elections.
Reports said that Godfrey, who was the former deputy minister for Local Government, was found dead in his Lilongwe home in the early hours of today.
His spokesman has however denied claims that the minister’s suicide is linked to being voted out of his Lilongwe Msozi North seat.
In his suicide note, the former minister asked President Joyce Banda to care for his daughter and provide for her schooling.
This tragic incident is the latest twist in a Malawian political saga marred by allegations of fraud and ballot stuffing, riots and wholesale system failures.
Earlier today, elections officials admitted they have had to use email and fax to tally votes and share results after their electronic counting system crashed.
Elections chief Willie Kalonga said that the system “is refusing to take the information from the ground where our data clerks are stationed to send the results.”
Around 7.5 million people were eligible to vote in the fifth democratic elections since the end of the Kamuzu Banda dictatorship 20 years ago.
The Malawi Electoral Commission (MEC) will only announce results when 30% of the votes have been counted.
Tallying, however, is currently “not anywhere in the neighbourhood” of that figure, MEC chairman Maxon Mbendera said.